Classical music performed in the language of soul

Remarkable pianist, Vesselin Stanev, has not changed his traditions this year and played two stunning concerts in St.Petersburg and Moscow.  The musician is not a stranger in Moscow, one many not look into his biography and search for his roots, although it is worthy of note that Vesselin Stanev graduated from the Moscow Conservatory, which is definitely something to be proud of. The pianist of the Bulgarian origin has earned his name both in Russia and in the whole world. This is an international talent, who speaks the language understandable for everyone: the language of inner impulses and human passions. The program of yesterday's concert in the Moscow Conservatory included five sonatas by Domenico Scarlatti - the founder of the piano music, the creator of the masterly clavecin style – four compositions by Frederic Chopin (Barcarolla in fis-dur (op. 60), Polonaizin fis-moll (op. 44), Nocturne in c-moll (op. 48),  Nr. 1, Scherzo Nr. 3 in cis-moll (op. 39) and also 24 preludes (op. 11) of the great Alexander Skryabin – the proponent of life-changing arts. 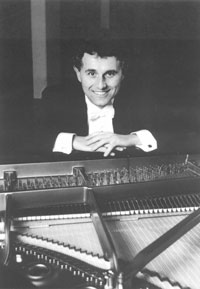 Vesselin Stanev performed this music program in Dublin, Mardid, Paris and London this year. The pianist's work has received outstanding epithets depending on the temperament of the French or the Irish, for example. Some said that the pianist was poetic, and his performance was elegant and restrained. Others wished to compare the musician with the rope-walker balancing underneath the circus dome. It was also said that Stanev's manner of playing the musical instrument was deprived of any kind of demagogy.

When we finally eyewitness the inspiring performance of utterly difficult musical compositions, we will follow our colleagues from Europe and exclaim: “Bravo, Stanev! You have touched upon most sensitive strings of the Russian soul!”

Music is probably the universal language of international and inter-spiritual human communication, which brings people together and takes them out of the dull everyday world. Demagogy is excluded in music, especially when Vesselin Stanev puts so much heart and soul into his performance, when he deifies the possibility of communication with great composers. Bringing lyrics to the forefront, Stanev includes other works into his programs, which let him amaze his viewers with virtuosity and remarkable musical memory: he plays all the works by heart! Are those all of the brilliant qualities? No one really knows how Dominico Scarlatti (Stanev played eight sonatas of this composer at his last year's concert in Russia) could achieve the incredible sound of the instrument. Most likely, mastering Scarlatti's art is a possibility for Stanev to cognize the composer's artistic language. From year to year Stanev “declassifies hieroglyphs of the ancient manuscript” and we all perceive its significance as our hearts sink with the sounds of music.

This is the eternal and highly important meaning of music. “Nothing can be so ridiculous than music with no sense hidden inside,” Chopin used to say. Skryabin's apologetics of Russian cosmism, the passionate trust in Man, the Creator, burst out of pianist's first chords and pull people out of their inner twilight.

We talk about composers, but we can listen to them through the interpretation of musicians. Music is alive when there are talented musicians, who act like conductors of spiritual energy from the depth of the ages to modern times. We are lucky to have such a musician as Stanev at this point. The striking endowments that verge on genius. His interpretations manifest a mature artist, determination and firmness, peculiar features of true romanticists, whereas brilliant techniques of playing the piano become something like a powerful strength. It also seems that there is absolute indifference to the material side of life (Stanev often gives charitable concerts) – these are the peculiarities that an attentive listener will definitely point out while listening to the work of this performer. The number of Stanev fans grows every year.