A raven-haired Miss Japan, Riyo Mori, was crowned Miss Universe 2007 on Monday in a contest marked by protests, a banned dress and the withdrawal of one beauty queen on the ground the pageant degrades women. 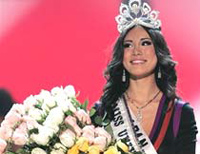 Mori, 20, the 56th winner of the title, was given her $250,000 diamond-and-pearl crown by last year's winner, Zuleyka Rivera of Puerto Rico, watched by a live audience of 10,000 and some 600 million television viewers worldwide.

A lifelong ballet dancer from a village near Mount Fuji, Mori wore a striking black gown with colored lapels for the final. Winning surpassed the ambition of her grandmother, who told her as a child she wanted her to be Miss Japan one day.

"My mind went blank," she said of the winning moment.

During the evening gown parade, Miss USA, Rachel Smith, slipped on the runway and landed on her bottom, although the slip didn't stop her earning fifth place.

This year's contest was marked by controversy, with a handful of Mexicans booing Smith in the run-up to the finals because of what they saw as U.S. unfriendliness toward illegal immigrants.

Miss Sweden, Isabel Lestapier Winqvist, unexpectedly pulled out of the event because of complaints in her country that it degrades women. Sweden has won the Miss Universe crown three times in the past.

In another hitch, Miss Mexico was made to change her outfit for the regional dress contest after her original dress, decorated with brutal images of rebels in a 1920s religious uprising being hanged or shot, drew accusations of poor taste, Reuters reports.

The program was hosted by 1999 Miss Teen USA Vanessa Minnillo and "Extra'' weekend correspondent Mario Lopez and was expected to be viewed by more than 600 million people in more than 180 countries.

The pageant was last held in Mexico City in 1993, when Torres was crowned, the AP reports.