Death is only an interchange station between the two worlds

Every person at some point of his life questions himself what comes next after the physical death. Is everything to finish with the last breath or does the soul go on living? 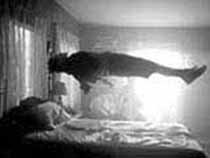 Russian language connects the notion of soul with the word to breath as these have similar roots. Since earlier times people observed dead and alive tribesmen and made a conclusion that there was something inside a human being connected with breath. They started calling it soul (or dusha in Russian).

Australian aborigines believe in soul's existence. They think that a woman gets pregnant if she passes a tree, a rock or some animal, whose soul moves into the body of her future child.

The existence of soul is acknowledged by the people in Asia, Europe, America, Africa and Australia. In the Ancient Egypt soul was considered a constituent part of a human body.

Each religion allots a certain place in the organism for the soul. People in the ancient Babylon, for instance, thought that soul lived in ears. Ancient Jews believed it could be found in human blood.

However, there is an opinion that this substance occupies the whole body, not just a single organ. One of the most prominent figures of Russian Orthodox Church Dmitry Rostovsky agrees with this point of view.

Not so long ago German psychologists of Lubeck University conducted a really interesting experiment. They asked children aged 7-17 where in the human body the soul could be located. The eldest ones said it could be found everywhere. Some said that the soul existed in the head while the youngest ones pointed to a part of body a bit to the left of the heart. Yet some even named eyes or solar plexus as “the residence of the soul”.

In recent years the hypothesis of the soul occupying the heart has found certain confirmation.  A psychiatrist Paul Pearsall of Sinai Hospital of Detroit wrote a book The Heart's Code based on the answers he got from 140 patients with transplanted heart during the questionnaire. As a result, Dr. Pearsall concluded that it is in the heart that the personality is programmed. The heart controls the brain and not vice versa. Feelings, fears, dreams and thoughts are all decoded in heart cells. This cell memory – a soul – is transferred to another person with a transplanted heart. There are numerous examples in the book that support this idea. A 41-year-old who was transplanted the heart of a 19-year-old girl that had died in the railway accident changed drastically after the operation. He used to be really cool and sober but suddenly turned into temperamental and careless person.

Another interesting example is of Silvia Clair, dancing instructor from New York. At the age of 50 she had a transplantation of heart. When she came round after the operation the first thing she though about was beer. Afterwards at nights she started dreaming of some mysterious man called T.L. After secret investigation she found out that she had the heart of a guy who had died at the age of 18. His initials were T.L. and according to his relatives his favorite drink was cold beer.

At the end of 1990 sensational news spread around the world. Scientists at one of the US laboratories managed to weigh the soul. They discovered that people weighed 2,5-6,5 grams less after their death. However, this was not the first attempt to weighthe soul.In 1915, similar experiment was conducted in the US. At that time scientists came to the conclusion that the soul weighed 22,4 grams.

Even more sensational was the year 2001. At the beginning of the year British scientists Sam Parnia and Peter Fenwick suggested that consciousness might continue living after the brain has stopped functioning. The research involved 63 patients that experienced clinical death. 56 people do not remember anything of the period when they were clinically dead. However, seven patients had clear memories of what they felt at that period. Four of them said they were overwhelmed with joy and peace and the time was running faster. Then they saw a bright light and saw mythical creatures that looked like angels or saints. They claimed they had been to another world for some time and then came back.

It is worth mentioning that none of the patients was religious. Tree of them confessed that did not attend church at all. Thus, these stories cannot be explained by religious fanaticism.

British scientists refuted the traditional idea that the brain stopped functioning because of the lack of oxygen. None of the patients showed a significant decay of oxygen content in the tissues of central nervous system.

Another hypothesis that was brought into challenge is that the visions may be caused by inexpedient combination of medicine during resuscitation. Everything was performed strictly according to the standard procedure.

Later in December 2001 three Dutch scientists under the supervision of Pim van Lommel conducted the biggest research involving people who had experienced clinical death. The results were published in the medical journal Lancet and were similar to those of the British scientists.

Van Lommel and his colleagues claimed that the visions came at the very moment when the central neural system stopped functioning. This means that the consciousness is separate from the brain's activity.

Van Lommel provides a fascinating example of the Near Death Experience. A patient in coma was delivered to the resuscitation ward. All the attempts to reanimate him proved unsuccessful. His brain stopped functioning and the encephalogram showed a straight line. Doctors decided to try intubation (that is insertion of a tube into larynx and trachea for ventilation and airway management). The patient had a denture that was taken away by the doctor. In an hour the patient's heart started beating again and his blood pressure came back to normal. In a week, the resurrected patient asked the nurse: “You know, where my denture is! You took away my teeth and put them into a drawer of a trolley!” He said that he was observing himself from above at the moment of his own death. He described in a detail the ward and the doctors' actions. The man was really afraid that doctors would stop reanimating him and tried to show them he was alive.

Dutch scientists also discovered that women had more powerful feelings than men. Most of the patients that had very deep clinical death die in the next month after the reanimation measures. The visions of blind people do not differ from those who are able to see.

It looks like scientists are very busy with proving immortality of the soul. The only thing we can do is accept that death is only an interchange station between the two worlds.