Russian man pretends to be American to escape legal persecution

A Russian man, who wanted to escape legal persecution, pretended to be an American citizen who ventured to travel across Russia without money and documents to set a new Guinness Record. In order to look like an American man, the swindler put on a doo-rag and arranged pigtails. Russian journalists believed his stories and sincerely helped him in spite of his clumsy English and Russian roots. 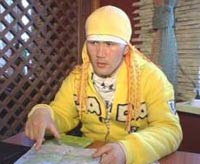 Russian man pretends to be American to escape legal persecution

Finally one of local TV channels made a report about the foreign “hero”. A professor of philology exposed the malefactor when he started talking to him in English. The “foreigner” could not say anything in English and was forced to respond in pure Russian. The man threatened that he would stir up an international scandal.

Rustam, 23, invented an artful plan after he had been put on the federal wanted list on suspicion of robbery. The man did not want to find himself in jail again and decided to get engaged in great swindle.

As it was reported during the investigation the swindler had been hitch-hiking across Russia pretending to be a foreigner. The investigators say that his plan was very simple.

He was traveling from one city to another and visiting offices of local newspapers telling journalists that he was a US citizen willing to set a new Guinness record by walking from Vladivostok to Murmansk without documents and money. Rustam even changed his appearance to make his story more believable. If someone asked him about his non-US appearance, the man would explain in poor English that his predecessors came from Thailand.

Journalists believed the stories and tried to help him the adventurous “ foreigner .” They gave him food, money and invited him to night clubs and restaurants.

“The offender appeared to be a good psychologist. Furthermore, he realized that very few people in Russian provinces could speak English”, investigators said.

In every town the swindler introduced himself as a different person. It was very difficult for the police to figure him out. Rustam raised suspicion with police officers in many towns, but managed to persuade the police to let him go.

The swindler was exposed in the city of Samara when he was trying to enter the territory of the local university. The security service asked him to show a student card. Rustam answered in English . Afterwards, the security called a professor of foreign languages to talk to the foreign citizen. When the professor came and started talking to Rustam in English, the man became confused and threatened the professor in pure Russian to stir up an international scandal. The security service called the police and they detained the so-called “foreigner.”