Russian doctor miraculously cures HIV for 60 dollars in one minute

A new way to “cure” HIV has been found in Moscow. Olga Varnavskya, an employee of dermatovenerologic clinic, issued HIV-negative certificates for everyone who was ready to pay 1500 rubles ($60) for it. 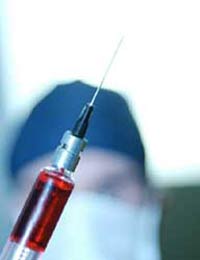 Russian doctor miraculously cures HIV for 60 dollars in one minute

Patients gave Olga a copy of their passports and money. After signing all necessary documents Olga in her turn issued HIV-negative certificates. Most of her clients were guest workers.

According to Russian laws all guest workers must pass an HIV blood test and obtain a special certificate confirming their HIV-negative status. This procedure is mandatory for guest workers willing to receive documents legalizing their stay in Moscow, including job papers.

The police found copies of passports, HIV-negative certificates and 3500 rubles marked with special solution in doctor's office. The evidence was enough to file a lawsuit against her.

Experts say that Russian laws should be blamed for such an absurd situation. Most guest workers who arrive in Moscow simply do not know anything about special medical centers where they can take medical tests and receive the necessary certificate legally. So they have to give bribes to obtain necessary documents to get a job in Moscow.

Moscow authorities are concerned about the fact that some of Olga’s clients could have been HIV-positive. Investigators currently study the list of those patients who bought HIV-negative certificates from the doctor. All of them will have to take blood tests anyway.