The unusual baby boy was born in the town of Volzhsky, the Volgograd region of Russia. His mother, Nadezhda Kipriyanovich, gave birth to her son one fine morning. “It all happened so fast, I did not even feel any pain. When they showed the baby to me, the boy was looking at me with a grown-up look. As a pediatrician I know that newborns cannot concentrate looks on anything. However, my little baby was staring at me with his big brown eyes. Brushing that fact aside, he was a usual little baby, like all other kids,” the boys mother said.

Read the first part of the story about Boriska here

When the mother and her son returned home from the maternity hospital, the woman started noticing very curious things about her little son. The boy, whom the mother named Boris, hardly ever cried and never suffered from any ailments. He was growing up like all other children, but he started speaking whole phrases at the age of eight months. The parents gave the baby a meccano, and the boy started making geometrically correct figures from it, combining different parts with precision. “I had a very weird feeling that we were like aliens to him, with whom he was trying to establish a contact with,” the boy's mother said. 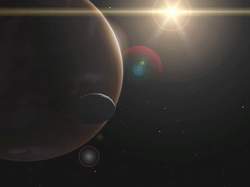 When Boris, or Boriska, as parents were affectionately calling their son, turned two, he started drawing pictures, which looked abstract at first: they were mixtures of blue and violet colors. When psychologists examined the drawings, they said that the boy was probably trying to draw the auras of people, whom he could see around. Boris was not even three, when he started telling his parents of the Universe.

”He could name all the planets of the solar systems and even their satellites. He was showering me with names and numbers of galaxies. At first I found it very frightening, I thought that my son was out of mind, but then I decided to check if those names really existed. I took some books on astronomy and I was shocked to find out that the boy knew so much about this science,” Nadezhda said.

Rumors about a baby-astronomer were spreading about the town faster than the speed of light. The boy became the local celebrity: people were curious about the child, everybody wanted to understand how he could know so many things. Boriska was willing to tell his visitors of extraterrestrial civilizations, about the existence of the ancient race of humans that were three meters of stature, of future climate and global changes…Everyone was listening to the little boy with great interest, but it goes without saying that the people did not believe those stories.

The parents decided to baptize their child just to be on the safe side: they already started thinking that there was something definitely wrong with their baby. Soon after that Boriska started telling people of their sins. He would come up to a guy in the street and tell him to quit doing drugs; he would tell adult men to stop cheating on their wives, etc. The little prophet was warning people against forthcoming troubles and diseases, which created quite an unfavorable reputation for the boy's parents.

Nadezhda noticed later that her son would often feel bad on the threshold of serious disasters. “When the Kursk submarine sank, he was all aching. He was suffering during the hostage crisis in Beslan too, he refused to go to school during the days of that horrible attack,” the boy's mother said.

When asked about his feelings during the days of the Beslan crisis, Boris said that he was burning from the inside: “It was like as if a flame was burning inside of me. I knew that the story in Beslan would have a horrible end,” the boy said.

The boy is quite optimistic about Russia's future, though: “The situationinthecountrywillbeimprovinggradually. However, planet Earth will have to experience two very dangerous years – 2009 and 2013. Those catastrophes will be connected with water,” Boriska said.

Boriska caught Russian scientists' attention in the summer of the current year. Specialists of the Institute of Earth Magnetism and Radio-waves of the Russian Academy of Sciences photographed the boy's aura, which turned out to be unusually strong.

”He has the orange spectrogram, which says that he is a joyful person of a powerful intellect,” professor Vladislav Lugovenko said. “There is a theory, according to which the human brain has two basic memory types: work and remote memory. One of the most remarkable abilities of the human brain is its ability to save information about experience, emotions and thoughts both inwardly and outwardly, in the single informational space of the Universe. There are some unique individuals, who can  draw information from that field. In my opinion, every human being is connected with space by means of energy channels,” the scientist said.

According to Lugovenko, it is possible to measure people's extrasensorial qualities with the help of special devices, which make this procedure very easy. Modern scientists all over the world conduct extensive research works in an attempt to unveil the mystery of phenomenal children. As it turned out, people possessing unique abilities were born on all inhabited continents of the globe during the recent 20 years. Scientists call such kids “indigo children.”

”Boriska is one of them. Apparently, indigo children have a special mission to change our planet. Many of them have amended DNA spirals, which gives them incredibly strong immune system, which can even defeat AIDS. I have met such children in China, India, Vietnam and so on. I am sure that they will change the future of our civilization,” Vladislav Lugovenko said.

While world's leading space agencies are trying to find traces of life on planet Mars, eight-year-old Boriska tells his parents and friends everything he knows about the Martian civilization. Boriska remembers his past life. Specialists say that he knows the information, which he actually cannot know. A Russian journalist has recently talked to the boy about his unique knowledge and experience.

- Boriska, did you really live on Mars as people say around here?
- Yes, I did, it is true. I remember that time, when I was 14 or 15 years old. The Martians were waging wars all the time so I would often have to participate in air raids with a friend of mine. We could travel in time and space flying in round spaceships, but we would observe life on planet Earth on triangular aircrafts. Martian spaceships are very complicated. They are layered, and they can fly all across the Universe.
- Is there life on Mars now?
- Yes, there is, but the planet lost its atmosphere many years ago as a result of a global catastrophe. But Martian people still live there under the ground. They breath carbonic gas.
- How do they look those Martian people?
- Oh they are very tall, taller than seven meters. They possess incredible qualities.

“When we showed our boy to a variety of scientists, including ufologists, astronomers and historians, all of them agreed that it would be impossible to make all those stories up. Foreign languages and scientific terms, which he says, are usually used by specialists studying this or that particular science,” Boriska's mother said.

Doctors of traditional medicine acknowledge the boy's unusual abilities, although they do not say, of course, that the boy used to live on Mars in his past life.