Tennis superstar Maria Sharapova is very upset to have to forego her long-awaited debut in Fed Cup because of shoulder and hamstring injuries. So Maria decided not to lose her time. The young Russian tennis player regularly visits a lot of club parties and other social events. 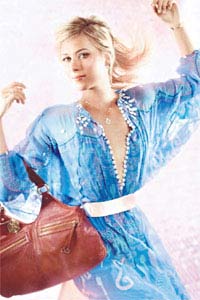 Not long ago Sharapova took park in fashion preview of hand bags designed by Japanese company Samantha Thavasa. Sharapova has been cooperating with this company for about a year. She designs the models of hand bags and sends them to Japan. Sharapova has already designed several model lines – for club parties and social events, for travels and for everysay life.

Hand bags for everyday life designed by Maria Sharapova cost about 200 dollars. Sharapova is also known for her own p a rfume line.

Russia's Black Sea resort city of Sochi has been short-listed as a candidate city to host the 2014 Olympic Winter Games, along with Austria's Salzburg and South Korea's PyeongChang.

"I want people to learn about Sochi as much as possible," Sharapova said in an interview with Russia Today TV Channel. "In the nearest future I will go on a world tour to tell everyone about the wonderful city of Sochi. I am proud of my city."

Sharapova, the holder of two Grand Slam titles and former world's No 1, was born in Siberia in 1987 and two years later her family moved to Sochi, where she lived and practiced tennis for the next five years.

"I had to leave Sochi due to my career as there were no places for [tennis] practices during winter," she added.

Sochi previously bid for the 1998 and 2002 Winter Olympics, but was rejected largely due to its poor-quality Soviet-era infrastructure. The winner of the bid will be announced in July 2007 in Guatemala City.