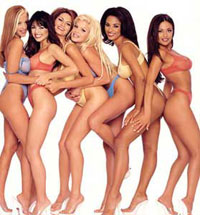 Two tipsy men are trying to elbow each other aside as they bill and coo a woman that looks completely loaded. A husband who is craving to spice up his sex life has somehow managed to talk his wife into having a threesome i.e. a sex session involving himself, his wife and another woman at the same time. However, the man seemed to overestimate his lovemaking potential and imagination and therefore ends up making a nuisance of himself in the eyes of his bewildered wife and the other woman who looked bored and disappointed. Or a sex party in a bathhouse where two or three couples are swinging partners and going all the way while others just sit around and watch the show, sipping at their drinks. The above activities fall under group sex.

A bit of history

Orgiastic practices were part of all pagan cultures in days of old. In one way or another, the practices had to do with the cult of fertility and the worship of certain deities associated with the cult. Special days marking the end of a season were allotted for festivities in which the people were allowed to take a break from their daily toil and “let off steam.”

The ancient Slavs held celebrations marking the eve of the Ivan Kupala day or the day of summer solstice. The people would go bathing in the rivers to wash away evil spells and diseases; they would place wreathes onto the water and search for a fern’s flower. They would also jump over a campfire and do some fortune-telling after dark. The festivity also included sex games in the water and on shore. Having sex on that special night was not considered a sinful act.

Ecstatic practices including those characterized by sex existed among the ancients e.g. the Egyptians, Babylonians, Indians and many other peoples.

Those taking part in an orgy should forget who they are for the time being, they should temporarily give up their social identity, which imposes behavioral restrictions. This is the first and most important step they should take. For a certain period of time, participants of an orgy should take off the masks and guises they wear in their regular life e.g. a man should forget that he is known as a successful sales manager; a woman should forget that she is a housewife and mother of two; another man should forget that he is a respectable university professor. They can strip their clothes off and step into the light – the easiest way to break down the barrier. No doubt about it, it is hard to take your pants off and remain in the altogether. On the other hand, it would ludicrous to act in a “decent way” with your pants down. Likewise, a guy wearing a necktie during foreplay would look preposterous. Once they get naked, participants can also get rid of their complexes relating to physical imprecations. You do not have to be ashamed no more after exposing your “beautiful” body to those who care to look at it.

The flip side of the coin

Now it is time you answered the question: Is it really worthwhile taking a chance on the experiment we are talking about?

Fifth, 90% of the sweetness of the forbidden fruit has to do with the fact that the fruit is actually forbidden. However, you may find it pretty sour and then you will be greatly disappointed.