Mummification becomes popular as a way of becoming immortal

Anyone would probably remember famous Stephen Sommers' movie The Mummy about the adventures of the treasure hunters in Sahara desert in 1925. When discovering an ancient tomb they accidentally freed the evil that had been hiding 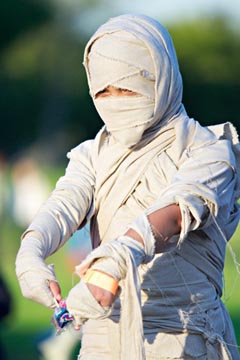 in the priest's body for three thousand years. Of course, that is just a fiction. To be precise it is impossible, speaking about Egyptian mummies. In order to preserve the body of the dead it was disbrained and exenterated (with the exception for the heart). After that the body was kept in saline solution. After the ritual 70 days the body was taken away from the saline and was covered with aroma oils and swaddled in linen cloth or its body cavities of chest, stomach and skull were stuffed with sawdust. The entrails were also perfumed and covered with preservative agents. Then they were put into sarcophagus.

This mummy is unlikely to be brought back to life. However, if the mummification is unusual there are more chances for resurrection. After sawing up a 1,5 meter stone monolith in the Birmingham quarry a mason Samuel Goodwin and his assistants found a hollow in its middle where there was…a toad. The poor creature even lived for half an hour after having been extracted. This is just one of the numerous similar examples.

Some scientists started making experiments at once. In 1825 an American Frank, for instance, placed 12 toads into limestone and sandstone blocks that then were luted with sheet glass and slate. He placed them one meter deep under the ground.  In a year it turned out that the toads in the sandstone blocks had died while those in the limestone blocks not only had survived but had put on weight as well. Of course humans differ from toads. Thus, it does not mean that they can be mummified and then brought back to life. However, there are some interesting ideas concerning this issue.

In 1989 Sputnik magazine published the account of Doctor of Biology N. Lisevich telling about one of the sights in Zen sect's Dawu temple in Vietnam. He wrote: “The superior Wu Khak Min, a man who was born more than three hundred years ago, is sitting in front of me in padamasana bending a little bit forward!” The monk decided to retire at the end of his life and plunged in praying and fasting. He allowed his disciples to come to see him only after the prayer drum becomes silent. Min fasted for 100 days and then asked the other monks to bury him only if they smelt the decay in a month after his death. The superior is still sitting in the niche untouched by the time. Of course he was not brought to life but the state of his body does not exclude such a possibility.

In the 9th century a Japanese monk Kukai founded a school thу members of which were meant to possess a secret knowledge that could not be accessed by common people. One of the chief ideas of the school's founder was “to become Buddha in your own body”. To put it into practice one had to prepare very thoroughly. After psychological preparation, prayers, meditations the devotee entered the final stage of his life that had to last at least 1000 days. The main principles of this stage were stillness of body, detachment, contemplation, and a specific way of breathing. The food quantities they eat at this time slowly decrease and do not include all the nourishing components such as amyloidal substances. The devotee's organism became transformed into endogenous state – that is started consuming its own tissues. As a result there was not much left of a person at the moment of his death. That is why there was nothing to decay. The body was placed into dry conditions so that the soft tissues left would dry out faster. It did not undergo any extra treatment.

This self-mummification became widely spread among the shugendo sect. Mummies were displayed in the temples and even worshipped as the embodiments of Buddha. The authorities of the Medieval Times tried to ban this practice. However, it remained very popular.

The research of one of such mummies in Vietnam showed that the body was not mummified in the proper sense of the word like it was customary in Egypt, for example. The brain and all the internal organs were left untouched. Such self-preservation for a long period of time is even more fascinating taking into account the almost 100 percent humidity in Vietnam. The statue is exposed to the wind but there is not even a sign of mould. Moreover, the remains kept on drying out even in such conditions.

As the science is not able to explain this phenomenon it cannot reproduce it as well. At the moment scientists are trying to reproduce the Egyptian technologies of mummification. In 1994 Ronald Wade from the Medical Center of the University of Maryland and Bob Brier from the Long-Island University succeeded in mummification experiment. This was the first mummy in 2800 years to be embalmed with usage of techniques and substances of the Ancient Egypt. The experiment was conducted with the body of a man who died of heart attack at the age of 70. He had decided to donate his body for scientific research.

The mummy was displayed at San Diego Museum of Man in 1998-1999. At the moment it is kept at the Medical School of the University of Maryland. The analytical newspaper Expert Center reports that American company Summon from Salt Lake City is following in the steps of Wade and Brier. It offered the mummification for everyone who wishes for $60000. The price includes the sarcophagus that can be even made of precious metals. Summon has already found its famous clients. The owner of Harrods shops in London Mohammed Al-Fayed is going to remain immortal with the help of mummification. He has already placed an order. The eccentric multi-millionaire expressed the desire that his mummy should be kept in glass sarcophagus in his house near Paris.