How have breasts been portrayed in literature, by Hollywood and in the movies? CyberShrink has tried to investigate this. 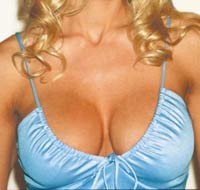 Until the recent gruesome popularity of TV series showing the extremes of plastic surgery, Hollywood preferred to pretend that vapid actresses notable solely for the size of their bosom were actually valued for their subtle acting skills, and that even the most pneumatic of them were "natural" rather than surgically enhanced.

Pamela Anderson is probably the current performer best known for her mammaries rather than her acting skills, both in the terminally insipid Baywatch TV series, devoted mainly to bouncing breasts on the beach, and in a really bad film Barb Wire. Earlier pneumatic actresses included Marilyn Monroe, who was actually a very talented actress and singer who tried to take her art really seriously; and less talented but heavily promoted women like Jayne Mansfield, Jane Russell, and Diana Dors, let alone the mysteriously famed and soporific Anna Nicole Smith.

Breasts in the movies

In Carnal Knowledge (1971) Jack Nicholson plays a lawyer fixated on big breasts, provided by his mistress, Ann-Margaret, but who becomes increasingly impotent. There's a curious scene in Exit to Eden (1994) in which the hero calmly butters a breast, sprinkles it with cinnamon, and licks it, before indecisively taking bites from a croissant.

The crude but at one time notorious director Russ Meyer was obsessed with huge-breasted women, sexually demanding, who dominated all around them, the breasts not so much objects of desire as weapons (see, for instance, his 1966 film, Faster, Pussycat! Kill! Kill!). In a scene that spoke of sheer desperation, in a the feeble movie S.O.B., directed by her husband Blake Edwards at a time when her career wasn't at it's most successful, Julie Andrews (yes, she of Mary Poppins and The Sound of Music!) bared her breast dramatically on screen.