One of the issues of a New York medical bulletin dating back to 1888 contains description of an amazing case of a sailor who was badly injured while on duty. The sailor worked at a river tugboat. One day his tugboat was towing a barge loaded with bulky boxes, which were stacked on the deck in two tiers, one above the other. The sailor was positioned on the bow of the barge as his tugboat was nearing a bridge with a low archway. By some unfortunate twist of fate, the sailor decided to check lashings on the top level boxes at that point. He stuck his head above the boxes and began examining the lashings. His eyes were looking aft as the tugboat moved up closer to the bridge. The sailor was completely unaware of the imminent danger looming a few yards away. A sharp-edged lower beam of the bridge span ran against the sailor’s head, cutting a sizeable piece off his skull, approximately two inches above his right eye. 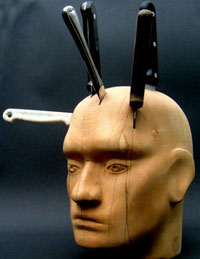 The rest of the story reads like a miracle. The sailor was still alive when taken to hospital two hours later. Doctors reckoned that the patient would die anyway – nearly one fourth of his head was gone. They were applying bandages to his massive wound when he opened his eyes and asked them what really happened to him. Then he got off the operating table and asked for his coveralls. Needless to say, the patient was restrained and admitted to a hospital ward, in which he spent the next two months. He reportedly felt fully recovered and reported back to his vessel. Apart from occasional headaches and dizziness, the sailor had no complaints about his health. He suffered a minor stroke 26 years after surviving that bloodcurdling accident. The sailor’s left arm and leg were partly paralyzed as a result. Doctors also put down in his case history that the patient had developed a tendency for hysteria. Taking into account the fact that the case was reported at the end of 19th century, one may have doubts about solid scientific evidence behind the story. However, a number of similarly amazing cases entered medical records much later.

In 1935, a child was delivered in St. Vincent Hospital in New York. The child was reported to have had no brain in his head. Despite the total absence of brain, the child somehow managed to last for 27 days. The child’s behavior seemed normal; he ate, slept and cried just like any other newborn baby did. Nobody suspected there was something wrong about his head until an autopsy was performed.

A 25-year-old American construction worker called Finley Gage fell victim to an accident during excavation and earth moving. The consequences of the accident entered the medical annals as one of the most inexplicable mysteries. A heavy steel rod that 109 cm long and 3 cm in diameter pierced through his head when a dynamite stick went off far too close to a group of workers. The lethal object got into Gage’s cheek, knocking off one of the molars and putting a big hole in his brain. The most astonishing thing was that Gage was still alive after the accident. His injuries were not as severe as they could have been: he lost the molar and one of the eyes. Gage spent some time in hospital and got well almost in full. He still had most of his faculties and the ability to control his body. Some other cases mentioned below seem completely improbable from the medical point of view. There are stories about people who somehow stayed alive for a while after having their heads blown to smithereens.

One of such incredible stories was reported by Boris Luchkin, a former noncommissioned officer who served in a reconnaissance unit of the Soviet Army during WWII. Luchkin remembered one mission behind enemy lines. A lieutenant who was in charge of their recon unit died on that day. The lieutenant stepped on a land mine and got his head blown away by the blast. Well, most of his head was gone save for part of the chin and a lower jaw. But the headless body was still standing. According to Luchkin, the lieutenant (or what was left of him) unbuttoned his jacket and produced a map with a mission itinerary.Themaphadbeen already smeared with blood. Finally, the lieutenant handed the map to Luchkin and collapsed.

Back then nobody believed that Luchkin had seen the commander standing with his head blown off. As it turned out, Luchkin was the only person who stood in close proximity to the lieutenant at the time of the explosion. Unlike Luchkin, no other soldiers could see the picture in all its gore and weirdness.

Historical chronicles contain another case shrouded in mystery. In 1636, King Ludwig of Bavaria condemned one Dietz von Schaumburg and his four landsknechts to death for rising in arms against the king. In line with the knightly tradition, King Ludwig asked Dietz what his last wish would be. Much to Ludwig’s surprise, Dietz requested that all the condemned men be formed into line at an interval of 8 steps between one another. Dietz wished to be beheaded first. Dietz promised that he would run headless past his men, and requested the king to pardon those whom he would manage to overrun. The king issued orders to comply with the request. The noble Ditz kneeled down and place his head on the executioner’s block. No sooner had his head rolled down the gutter than Dietz got up to his feet and started running past his landsknechts who stood awestruck and speechless. Dietz fell to the ground only after running past the last man in line. The king kept his promise and pardoned the landsknechts.

A report discovered in the British military archives depicts rather incredible circumstances surrounding the death of Captain T. Mulvane, a commander of Company B of the 1st Yorkshire regiment. The captain was killed in action during one of the Indian campaigns in the early 19th century. The captain was reportedly fighting in a hand-to-hand combat during the assault on Fort Amara. Mulvane swung his saber at an enemy soldier and chopped his head off. But the soldier did not go down like a sack of potatoes. The soldier’s headless body aimed a rifle point-blank at the captain instead. A shot rang out. The British officer was hit through the heart and died on the spot.

Igor Kaufman, a journalist, writes about a case of “life after death” that defies imagination. Kaufman describes a tragic case of one mushroom picker who went mushrooming near the city of Petergoff shortly after the war. The guy apparently came across some explosive device in the forest. The device went off in his hands. As a result, his head was blown to shreds. Kaufman claims the headless body of the man kept walking some two hundred meters and crossed a narrow bridge over the creek in process. Kaufman stresses the point that the case is based on a true story backed by documented eyewitness’ accounts and pieces of evidence gathered by the police. The files pertaining to the case are still kept in the archives. Bearing in mind the above, should we reach to the conclusion that a sudden and complete loss of the brain does not always result in an instant death? Then who or what still holds control over the body, prompting it to act in a way that seems quite logical?

In an attempt to answer the question, we can make use of an interesting theory put forth by Prof. Igor Blatov. He believes that the human being has the “soul” in addition to the conscious mind; it is a kind of “storage room” for programs responsible for the functioning of the body at all levels, from the nervous system activity to various processes occurring in the cells. The conscious is a result of the operation of that software, or complicated workings of the soul, in other words. The DNA molecules hold information that makes up the software.

According to latest concepts, there are two control systems in the human body. The first one comprises the brain and nervous system, which uses nerve impulse or electrical activity for transmitting information. The other control system rests on the endocrine glands. The latter uses special biological substances or hormones for carrying information around the body.