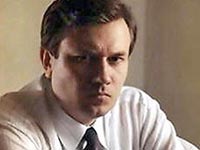 Grabovoy graduated from Tashkent University's faculty of mechanics and mathematics. He worked at Uzbek airline using his extrasensory abilities “to communicate with the equipment”. Then he found himself protected by the authorities of Uzbekistan after inculcating on high officials that he could not only determine the malfunction of aeroequipment at a distance, but also to solve certain technical problems while the plain was in the sky.  When in Moscow, Grabovoy found his luck: at that time the deputy head of the president's security, general Rogozin, attracted different magicians and psychics. They made up horoscopes for the country’s authorities. Their predictions were used in economic reforms. Grabovoy even had an office in the centre of Moscow.

Those who were acquainted with Grabovoy during that period say that his ambitions went far beyond technical success. He pretended to become a healer and cure even cancer and AIDS. Then he claimed that he knew how to raise the dead.

In 2004 Grigoriy Grabovoy was one of numerous healers who cured all sorts of diseases until he claimed to be Jesus Christ of the Second Coming and afterwards the Triune God the Father. His sect became well known after his visit to Beslan, where he promised to raise all the victims of the school hostage from the dead. This dirty PR campaign contributed to his popularity and at the moment he is aimed at big-time politics.

Grabovoy has already created a political party called the Voluntary Propagators of Grigoriy Grabovoy’s doctrine and have already conducted six conventions with it. During the conventions he emphasizes that he is going to become Russian president and to deliver the country from disasters by means of magic. All of his followers in the party's divisions in all parts of Russia place faith in Grabovoy's ability to raise from the dead as well as to cure the disease and to diagnose the equipment. They believe he will be able to control the events and to save the world from possible global catastrophe. 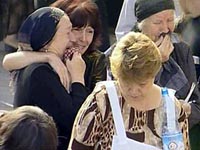 Soon after the Beslan school hostage crisis Grabovoy's representatives appeared in town to offer resurrection of the victims. However, they were sent away. In a year several women from the Committee of Beslan Mothers went to Moscow and allegedly signed a contract with “the healer” so that he would raise their dead children.

The majority of the population in North Ossetia is sure that this is an attempt to discredit and split the Beslan Mothers organization by calling its members insane, Novye Izvestia newspaper reports.

Looks like everybody needs Grabovoy: Beslan women to be comforted, authorities to distract people from their negligence. That is why Grabovoy himself is so self-confident and sure of his future.

Women that contacted Grabovoy are now looking forward to 15 October. It is on this day that their children will be brought back to life, as promised by Grabovoy.

Beslan citizens do not know how to help the women. An Orthodox church in Beslan held an all-day service on Sunday. The citizens decided to fight against Grabovoy in this way.

Most of the citizens think that Grabovoy is connected with Federal Security Services. The member of Beslan Mothers, Rita Rubaeva says, “At first we had only one problem: finding those who were responsible for the tragedy. And now we have to fight this scum as well. The sanest women of our movement as if have gone crazy. They have forgotten that the main aim of our committee is to find out the truth and to identify the guilty. That is why we declared in a statement that their visit to Grabovoy was a provocation planned beforehand”.

This idea is also proved by the fact that a couple of days after women's visit the videotape recording of the visit was mysteriously obtained by the media.

The women themselves do not consider their visit to “the healer” something extraordinary. They think it is their own business. However, it became clear even from the brief phone-conversation that their mental state leaves much to be desired, Novye Izvestia reports.

“There is no doubt that Grabovoy is a swindler who has extrasensory abilities. These abilities may be primitive but one doesn’t need to be skilled to influence a desperate person”, the head of the Center of Legal and Psychological Assistance in Emergency Situations, professor Mikhail Vinogradov.

According to psychologists attending Grabovoy's sect is not only financially burdensome but is also harmful for mental health.  “Grabovoy is nonsense, but very dangerous one. The mechanism is the same as in any sect. Grabovoy is making the most of the people's grief,” says the dean of Samara University Konstantin Lisetskiy.