Future technologies may destroy sex as ultimate pleasure for humans 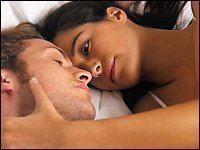 Future technologies may destroy sex as ultimate pleasure for humans

Super modern scientific achievements and hi-tech technologies will definitely serve for people’s sexuality in the future. The range of gadgets meant for sex games will greatly extend. Partners will be able to enjoy sex at a distance thanks to Internet manipulations with a vibrator on one end and an artificial vagina on the other end. Technologies of this type are already available in some parts of the planet. In the future, the performance capabilities of such sex technologies will be programmed individually for any particular client. New materials will appear to make lots of things from beds to condoms that will be as soft and warm as touches of the human body.

Hopefully, pharmacology of the future will be more effective in solution of problems that interfere with people’s intensive sexual life. It is highly likely that people will have more effective medications with no side effects to stimulate potency and be secured against unwanted pregnancy with better pills. Researchers and mere mortals hope that a medication to fight AIDS will be finally invented; and scientists say that such a medication may appear within the next period of five to twenty years. In a word, people will have a better resource base to enjoy sex and be more resourceful in making their partners happy.

The public morals have been dictating to people for hundreds of years in what manner they must have sex and threatened that any deflection would end in infernal tortures. Luckily, in the course of time people are getting more disregardant of what the public morals say about the modes of having sex.

Animals treat sex as a way to give life to new generations and a method to establish order within a rank. People have learnt to solve these problems in a different way: they like artificial impregnation as a reproduction method and highly esteem the Forbes ranking. Humans have sex rather for pleasure. However, the number of human pleasures is speedily increasing which means that sex is becoming a form of ordinary pleasure together with tasty meals, going to a sauna or riding a horse. It will come even to getting erotic pleasure without the traditional skin to skin contacts with a partner.

On the other hand, romantic love will be getting more elevated and intellectual.Mutualunderstanding, similar views and interests will be more important for partners than mere concupiscence. Does it mean that in the future people will not treat sex as something necessary and important? Will they be happy without love passions and sexual delight?

People whose professions are connected with sex and sexuality were asked about transformations that the sexual life of mankind would experience within the next fifteen years. Will the morals be free or puritan again? Will new sexual practices appear to substitute some of the traditional ones? Will the collective libido of mankind get stronger or weaker?

Writer Almat Malatov says that today there are two extremes in the attitude to sex: people rush from promiscuity to sanctimony which results in sacralization of sex. In the future sex will hopefully take an adequate place in people’s lives but still will not enjoy the dominating role. There will be less agitation about sexual activity. Also, there are no biological reasons for weakening or intensification of libido.

In 10-15 years sex shops will highly likely offer realistic sex toys that will resemble real body organs to the touch. More effective stimulants are to be invented both for women and for men. Vibrators are to become something more than mere gadgets for sex games. The variety of sexual games and facilities will be more available for people and the society will be more tolerant to sex peculiarities of others. The sex shop saleswoman is sure that clients of her shop will be less uneasy when coming to buy things to make their sexual activity better.

Some people are sure that no sexual revolutions will take place in the nearest fifteen years as there are left absolutely no unusual sexual practices. But people still do not know what niche sex should take in their lives. Like years ago, majority of people today have no idea what our sexual experience lets us know about the life in general. And it is unlikely that people will learn to understand it in the nearest future.

One thing is quite clear is that people of the future will have more opportunities to make their sexual activity better and more interesting, and there also will be less limits and restrictions in sex.