Mstislav Rostropovich, the ebullient master cellist who courageously fought for the rights of Soviet-era dissidents and later triumphantly played Bach suites below the crumbling Berlin Wall, has died. He was 80. 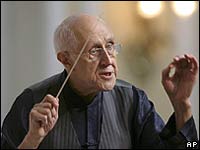 Rostropovich died Friday in a Moscow cancer hospital, the Itar-Tass news agency reported. Rostropovich's spokeswoman, Natalia Dollezhal, confirmed to The Associated Press that he had died but she did not provide other details.

Rostropovich, who resided in Paris after self-imposed exile, suffered from intestinal cancer.

His death follows that of another towering Russian - former President Boris N. Yeltsin, who led the country from Communism to democracy.

"The passing of Mstislav Rostropovich is a bitter blow to our culture," said author Alexander Solzhenitsyn, who was sheltered by Rostropovich during his bitter fight against Soviet authorities in the 1970s.

Rostropovich was hospitalized in Paris in early February, and after he took a turn for the worst, his family arranged for him to be flown back to Russia, longtime manager Ronald Wilford said.

He was treated at a Moscow hospital, and received a visit on Feb. 6 by Russian President Vladimir Putin.

Seven weeks later, he was well enough to attend a celebration at the Kremlin on his 80th birthday, but appeared frail.

"I feel myself the happiest man in the world," Rostropovich said after slowly rising from his chair during the March 27 celebration. "I will be even more happy if this evening will be pleasant for you."

Putin then presented him with a medal - the Order of Service to the Fatherland, the AP reports.

In 1968, Rostropovich made his conducting debut, at the Bolshoi Theater leading Tchaikovsky's “Eugene Onegin.” Two years later, he wrote an open letter to several Soviet newspapers in which he championed Solzhenitsyn, whose works were banned, and pleaded the cause of artistic freedom. He later recalled that the secret police, to whom the unpublished letter was leaked, questioned him about whom he thought had tried to blacken his name. He responded forthrightly that the letter was his own.

Performance opportunities in Russia quickly dried up and foreign travel was curtailed. In 1974, he and his family were granted permission for a two-year stay abroad. They didn't return, and in 1978 he and his wife were stripped of their Soviet citizenship (which was restored in 1990), Bloomberg reports.