The popular 31-year-old actress Milla Jovovich is pregnant for the first time and the child’s father is Paul Anderson. 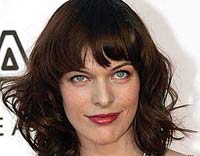 Milla and Paul started dating in 2002, after meeting at the filming of “Resident Evil”, which Paul directed. A year later, in March 2003, they got engaged.

They are now planning a wedding in Italy, in a castle owned by Milla`s friend, sky.news reports.

Milla told Us Weekly magazine: "He got me an antique ring and he proposed four years ago but we broke up in between. I was training for a film at the time and I was unable to train with the ring he got me, so I asked him to get me a more casual, smaller ring and he bought one for me.

"We haven't set a date yet. We talk about it casually. I have a good girlfriend in Italy. She is part of an ancient Italian family and they have a castle so we are hoping to get married there."

It will be Paul's first marriage while the "Fifth Element" star has been married twice before. She married director Luc Besson in 1997 and in 1992 she eloped to Las Vegas with her "Dazed and Confused" co-star Shawn Andrews when she was just 16. Her mother had the marriage annulled a month later.

Paul, who directed 2004's "AVP: Alien vs. Predator," is about to begin directing thriller "Man With The Football."

Married to Besson for two years until 1999, the Ukrainian-born star seems to have a thing for directorial talents, having met her current beau on the set of the 2002 film Resident Evil, which he directed.

A marriage would be a case of third-time lucky for the Zoolander and The Million Dollar Hotel Star.
Jovovich was briefly married to Dazed and Confused co-star Shawn Andrews in 1993, a relationship which was terminated by her mother a month later, Bounty.com reports.