A church wedding is becoming increasingly popular with Russians. Maybe it is just a fad or one of those things done for show. On the other hand, the bride and groom may be deeply religious people who hold a wedding ceremony in accordance with established wedding traditions and customs. Below is some information which may come in handy for those who decided to tie the knot. 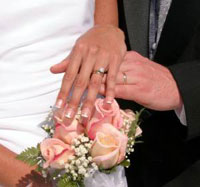 “A family is seen as “minor Church” in the Christian doctrine. The purpose of forming a family is not only procreation. The primary purpose concerns mutual help required for finding salvation. I know that some of the clergy demand that those parishioners who are no longer of childbearing age refrain from having marital relations. This viewpoint is erroneous. The marital relations establish a strong bond. The fathers of the Church said: ‘The marriage is fair and a marital bed is not filthy,’” said Professor Alexei Osipov at the Moscow Seminary of the Moscow Patriarchate.

“The Church teaches about a single marriage as being the norm,” said Mikhail Prokopenko, head of communications service with the Department of Foreign Relations of the Moscow Patriarchate. ‘What therefore God hath joined them together, let not man put asunder.’

(St. Mark, 10.9). The above words of Christ are repeated for several times during a church weeding to remind that neither the spouses nor other people shall have the right to destroy marriage.”

In the meantime, divorce as an extreme measure is allowed only in case the spouses commit deeds which are determined by the Church as grounds for divorce.

What is the attitude of the Church toward a civil marriage?

It would be wrong to characterize cohabitation as a civil marriage. A civil marriage is a form of marriage which is concluded in compliance with civil regulations. Some of the clergy refuse persons living in a civil marriage to receive communion. They believe such a living arrangement is fornication. According to a document adopted by the Synod, “the Church stresses the importance of a church marriage. However, pastors should be reminded that the Church holds a civil marriage in honor.

In accordance with the Russian church wedding traditions, a groom and bride should go to confession and receive communion on the eve of the nuptials. The mystery of nuptials comprises two parts: a betrothal and a nuptial benediction. The wedding rings symbolize the infinity of marriage. The candles handed to the newlyweds by a priest are the symbol of purity and chastity, the embodiment of joy transpired by virtue of an encounter of two people in love. The candles are not part of a wedding ceremony if marriage is concluded for the second or third time. A nuptial benediction commences once a betrothal ceremony is complete and the prayers are read. The verses (5.20-30) from Chapter 5 of the Epistle of the Paul the Apostle to the Ephesians are read during the nuptial benediction.

The last line of the final verse – “and the wife see that she reverence her husband” – refers to fear a wife must have lest she should afflict her husband one with pain and sorrow, and disturb the unity of the soul and the body. Likewise, a husband must be afraid of losing love, that is to say – the presence of God.

“An engagement and the signing of a Ketubah (a marriage contract) at times precede a Jewish wedding,” said Borukh Gorin, head of the public relations department of the Federation of Russia’s Jewish Communities. The Jewish ceremony usually starts with the bride andthe groom beingescorted to the huppah, a Jewish wedding canopy, by both sets of parents. The canopy is held up on four poles by unmarried Jewish men. The huppah is installed outdoors under the starry sky (because the Lord promised to the forefather Abraham that his descendents would multiply like stars in the sky).

The ceremony kicks off with the reading of the Ketubah. The groom is supposed to hand a symbolic dower to the bride’s father. The payment could be made in cash or even a slice of bread. As a rule, an article of jewelry worth several thousand rubles is used for the purpose.

There is only one wedding ring at the Jewish ceremony. The ring must have an even surface that is completely free from any marks or scratches. A Rabbi presiding over the ceremony checks the ring for smoothness, which is also verified by witnesses. The groom then puts the ring on the bride’s finger and pronounces: “You are hereby dedicated to me by the Law of Moses and Israel.”

To conclude the ceremony, the groom smashes a wine glass with his foot. The ritual is performed to symbolize memories of the destruction of Jerusalem. Once the ceremony under the huppah is over, the newlyweds spend 10-15 minutes together alone in a special room. “No sexual activity takes place in that room. The point is that a woman must not share a room with a stranger in accordance with the laws of Judaism. Upon her return from the room, a woman is formally considered a married woman. The men and women are seated in separate room during the Jewish wedding ceremony,” said Gorin.

According to Muslim wedding traditions, an offer of marriage is made by the woman’s father or guardian. However, a “blind wedding” is frowned upon in any case. At least one encounter between the future man and wife should precede the nuptials.

In light of the above circumstances, one may wonder if love has anything to do with the Muslim marriage. “According to Islam, love comes into being after the wedding,” said Valyulla Hazrat Yakupov, the first deputy mufti of Tatarstan. Divorcees or widows may make an independent decision on issues regarding marriage. Nowadays most women in Russia make an independent decision when it comes to marriage.

The marriage of a Muslim man and a Christian or Judaic woman is permitted under the shari‘ah. The wife is allowed to practice her religion. However, children should be raised in accordance with Islam. The norms of Islam stipulate that a Muslim woman is forbidden to marry a non-Muslim man.

The woman can get a divorce only by the decision of a religious judge. Saying the word “talak” thrice is all it takes for the man to dissolve the marriage. The marriage will be considered terminated in four months’ time. The period of four months is allotted for revealing possible pregnancy. Children will remain in their father’s custody in case of divorce. A woman’s infertility is not considered as a good reason for seeking divorce. Under the shari‘ah, a Muslim man is allowed to take another woman as wife for resolving the problem. The man must not have more than four wives. In this case, each wife is supposed to live in a separate house or apartment.