Man splashes sulfuric acid in his lover's face, begging her to marry him

A Ukrainian man came up with a hideous plan to get his girlfriend to accept his offer of marriage. He decided to mar her appearance by splashing sulfuric acid on her face. His plan seems to have worked. 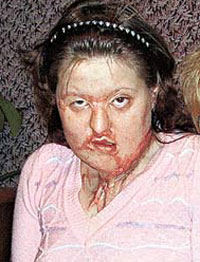 Man splashes sulfuric acid in his lover's face, begging her to marry him

Tanya Voronina is a high school graduate. Vlad Vashchuk is 30-year-old construction worker. He met her at a disco in her village two years ago. Vashchuk fell for the jolly girl pretty badly.

And she just felt bored or so it seemed to her at the time.

“You’re asking me for a date? Okay, I’ll have a date with you,” said she and shrank her shoulders.

So she went out with him once. Then they had another date. More dates followed. They had been dating for half a year when he proposed to her.

Tanya just burst out laughing. “You couldn’t have said anything more stupid than that,” Tanya said as her laughter subsided.

Vlad tried to play it down as if it was a silly a joke. He pretended his feelings had not been hurt.

“We kept on dating just like before. He’d call me every day when he was out in Odessa, working on a construction site,” Tanya said.

One day Tanya tried to call him herself. But Vlad forgot to carry his cell phone on that day. He left it in a dormitory. Dmitry Novak, Vlad’s roommate, answered the call. Dmitry and Tanya apparently had quite a chat. Novak came down to meet Tanya several days after.

“It was an instant hookup. We soon realized we were meant for each other. One week later Dima quit his job in Odessa and moved to my village,” Tanya said.

The lovers contemplated marriage. Some time later Vlad arrived from Odessa, looking for an explanation. Tanya did not choose her words carefully when she told Vlad that their relationship was over.

“Are you having an affair with my friend?” he gasped and looked her in the eye.

“Get lost!” Tanya said and swung her door shut.

On the next day she saw him standing near her house. Vlad was holding a beer bottle in his hand.

“He just said ‘I brought some photos for you, check it out,’ and then flung some stuff from that bottle right over face. For a moment I thought he splashed beer on me, what a shame,” Tanya said.

But the liquid that landed on Tanya’s face was not beer. It was sulfuric acid. Vlad put the acid into a beer bottle beforehand. Tanya started screaming from the excruciating pain. Somehow she managed to stumble up to her porch. Her mother called an ambulance and the police. Tanya was rushed to hospital. Her face was badly disfigured. She also had burns on her neck and breasts.

Dmitry had visited his fiancée in the hospital for several weeks. One day he disappeared. He reportedly moved back to Odessa without bidding farewell to the girl.

Meanwhile, Vlad began calling her each and every day. He kept talking about his love and affection, begging for forgiveness.

“Do you want me to bring the acid to the hospital so that you’ll throw it right in my face? I’m going to pick you up when you get well. We’re going get married; you’ll bear me two sons! We’ll name our firstborn ‘Kirill’,” Vlad would cry over the phone.

As it turned out later, Vlad Vashchuk already has four children. His mother looks after them. Vlad’s wife took her own life by hanging several years ago. It is still unclear why she committed suicide.

Vlad went into hiding soon after the incident. It took the police six months to track him down. He was arrested just a couple of weeks ago.

“Tanya had been trying to convince us for six months that she had no idea as to Vashchuk’s whereabouts. However, Tanya called his number and sent him text messages while we were questioning him. Those messages were her confessions of love and faithfulness. We suspect that the girl may have known exactly where Vashchuk was hiding out. But she never told us. Perhaps she forgave the monster. She might as well agree to marry him,” said one of the investigators.

Natalya, Tanya’s mother, is strongly opposed to the above version of the story. She is plainly refusing to accept it.

“They must be totally wrong. She just can’t have forgiven him. It’s out of the question,” said she.

In her turn, Tanya makes no comment whatsoever on the subject. Our questions seem to be falling on deaf ears.

The trial of Vlad Vashchuk got under way a few days ago. He may be sentenced to 8 years in prison. He has no doubts that his sweetheart will be waiting for him as long as it takes.