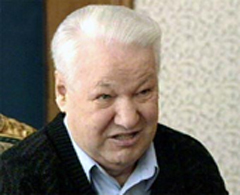 while being on holiday in Italy. He was renting Tartarugetta (tortoise in Italian) villa at the luxurious resort of Porto-Rotondo, ANSA news agency reports. The accident happened at the residence.

74-year-old ex-president was promptly sent to the local hospital, where doctors of the traumatology department put him a plaster, Iterfax reports referring to EFE.

The residence of the head of Italian government Silvio Berlusconi is located in Porto-Rotondo as well.

Unidentified source that is close to Yeltsin proved the information of the western media about the accident.

“He feels better and will come back to Moscow soon, probably this evening”, - the source reported.

ANSA reports that Yeltsin could have stumbled over something or have slipped and fallen.

The first aid was provided to the first president of Russia by security personnel. Afterwards the ambulance brought Yeltsin to the hospital of san Giovanni di Dio at Olbia. Yeltsin was put a plaster at the orthopedic department of the hospital.