It would be fair to say that the story of the Russian top model Natalia Vodianova resembles a fairy tale. Vodianova used to be a shy girl selling fruits on the market in one of the working-class neighborhoods of the city of Nizhni Novgorod. These days she is one of the world’s most beautiful women modeling for Calvin Klein and a number of other big-name companies. She is also happily married to the British nobleman, Lord Portman. 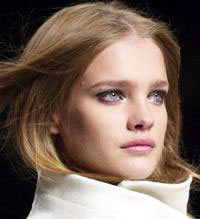 Vodianova turned 25 on February 28. Her story began nine years ago. She wanted to help her mother and two sisters make both ends meet. One of her sisters is a handicapped person. Natalia filed an application to a model agency of Nizhni Novgorog at the advice of Sergei, her boyfriend at the time. But the application was denied. The girl was told that she had no “potential” to become a model.

Natalia’s boyfriend had a different opinion on her prospects. He talked her into applying for another model agency located on the edge of the city. Sergei even volunteered to accompany her during her bus rides to the agency and back. Incidentally, years later Vodianova would buy him a sports car – a sign of gratitude to the man who changed her life.

The new agency showed lots of interest in Vodianova. But she had to quit her classes so that she could make money to support her loved ones. Alexei Vasilyev, a Moscow photographer commissioned by the French model agency ViVa, happened to visit Nizhni Novgorod at the time. Vasilyev caught a glimpse of Natasha while looking through piles of photos in her former model agency. A telephone rang in Vodianova’s apartment a few minutes later. Vasilyev invited Natasha to drop by and pose for a photo session.

Larisa Gromova, Natasha’s granddaughter, still has a vivid recollection of her granddaughter cutting her favorite velvet outfit into pieces. The granny is all smiles today. Back then, she felt really upset about the the fate of her one and only “formal” dress.

“Natasha was supposed to wear a white blouse, high-heeled shoes and a short black skirt for that casting. Natasha had no skirt available for the occasion. I went speechless when I saw my favorite velvet outfit cut all over. My anger subsided after Natasha explained to me the reason why she took my dress. Natasha sewed that skirt by hand; she never used a sewing machine. The skirt fitted her perfectly,” said the grandmother.

The rest is history, so to speak. Natasha was invited to model in France and signed her first contract. She quickly became a household name in the fashion industry, a model much sought after by many famous designers. Thanks to Natasha, the life of her loved ones greatly improved. Natasha bought them a new apartment in Nizhni Novgorog, paid their medicals bills in the best hospitals. She also paid for overseas college education of one of her sisters.

Natasha usually visits her hometown 3-4 times a year. A couple of years ago she raised funds for the construction of a big playground in her neighborhood. Natasha contacted a number of celebrities while raising money for the project. Mick Jagger donated an autographed guitar to her charity. The playground was built for all kinds of children including those with physical and mental handicaps. Natasha, her husband Justin Portman and their son Lucas unveiled the facility in the fall of 2006. Lots of people gathered at the ceremony. Some vandals sprayed paint all over the playground a month later. Natasha reportedly cried a lot after learning the news.

Vodianova says she and her husband were very lucky six years ago in New York, on September 11, 2001. The 19-year-old Natasha was pregnant at the time.

She and her husband were sleeping quietly in their Manhattan apartment as the terrorists were driving those hijacked planes into the WTC Towers.

“Our apartment is in close proximity to the World Trade Center. On that horrible morning we saw people jumping out of windows… The two towers looked absolutely terrifying. I told Justin that the buildings are going to collapse soon, but he didn’t seem to believe me at the beginning. He went: ‘Those towers are built to last, they’re not gonna crumble, no way…’ And then they began to fall apart. We ran out of our house several minutes before the second tower went down… We were just lucky,” said Vodianova, in an interview published by a Nizhni Novgorod newspaper several years ago.