What are the aims of today's young generation, what is their attitude toward out world, themselves and work? These were some of the question asked by the interviewers of wide-ranging research conducted by BBDO agency in France, Germany, Great Britain, Italy, Spain, Sweden, Czech Republic and Russia. 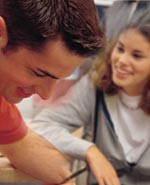 The research included only young people of 18-31 years old from advantaged families who had a higher education degree in creative sphere or were studying humanities at the universities.

The research shown that Russians and Europeans have a lot in common. Young intellectuals have a more positive outlook. They are self-confident (and often self-opinionated as well), susceptible to everything new, ready to experiment and to take action. At the same time they are not business inclined, and taking risks is not what they prefer. When it comes to politics it turns out that their creative minds are analytical, indifferent to ideology: they would not sacrifice comfort for participating in demonstration. They are practical and are ready to lift a finger only if it is vitally important to them. Young generation in all of the mentioned countries is open to new trends in music, fashion, food…They do not discuss others' behavior and respect privacy.

However, there are certain differences between Russians and young citizens of other countries where the research was conducted. Analysts emphasize that Russian youth is more optimistic. 79 percent of Russian young people are sure that they will live better than their parents. There are only 46 percent of those who agreed with this in Europe. Russians have more motivation as well.

When it comes to ambition 41 percent of young Russians say that they would like to become famous. Europeans are not so interested in this idea (or probably are not so outspoken). There are only 12 percent of such “maximalists” in Germany, 13 percent in Spain, 16 percent in Sweden, 20 percent in France. The average percent of Europeans who have such an ambition is 19.

This can be probably explained by some of the answers of the respondents in Europe: “Popularity limits freedom and makes you depend on others’ opinion”; “it's great to be famous and respected for your achievements, not for participation in some reality show” etc.

There is also a difference in attitudes toward work-leisure balance. Europeans think, “It is more important to lead an interesting life than to become rich.” Russians do not want to fix on what is already gained. Respondents in Europe say more often than Russians that they would like to earn some money and to retire as early as possible.

These results surprised analysts from Europe who report: “Unlike the majority of the young Europeans who say “Enough!” Russians declare “No! Not enough!” They are active and optimistic. They are insatiable and they like the word “more:” more work, more money, more sex…” In their sexual aspirations Russians are also in the lead.

One of the crucial points of the research was probably the characteristic of youth's civic consciousness. Respondents were asked whether they would fight for their country. Against overall indifference the answers of Russian respondents look promising. In fact, 64 percent of young Russians are ready to defend the country in case of real danger.

Another interesting point turn out to be religion. In spite of atheistic propaganda, which went on for several decades in the Soviet Union, the number of believers in Russia is greater than in many European countries (except for Italy).

The research destroyed several myths about Russian young generation. For instance, that of the Russian Dream to move abroad. In fact, only 22 per cent of the respondents hope to work or to live abroad in the next decade. In France, Germany, Sweden and Great Britain 34-49 percent said that they would like to move to a different country.