Indecision, politics and borderlines were keeping the two people apart for more than half a century

Bonds of marriage did not stop Frau Waldhem from leaving Germany and her legal husband and traveling to Russia to see her beloved. They last saw each other in 1945. 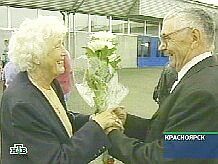 Lischen and Ivan came together again after 60 years of leading separate lives in different countries. Frau Waldhem starts her new life at the age of 80. She has left Luxemburg and settled in Russia's Krasnoyarsk for good. This is the city, where her beloved lives, a former Soviet officer, Ivan Byvshikh, NTV reports.

Ivan welcomed Lischen at the airport. Lischen left her two three-storied mansions in Germany, but the couple decided to live in Russia. The Russian man owns only a small apartment in Krasnoyarsk. Frau Waldhem has brought six packs of her things to her man's apartment too: clothes, cosmetics, old letters and photographs.

”I still see this picture as it was: her hair, her eyes, I was looking at her and our eyes met. Her deep black eyes. It hit me at once,” Ivan Byvshikh said.

”He was a very handsome young man. When I showed his picture to my friends in Luxemburg, they all said that they would fall in love with such guy at once,” Lischen Waldhem said.

The love affair started in 1945. A 20-year-old man, Ivan Byvshikh, and German girl, Lischen, were dating for about six months. Ivan returned to his fatherland afterwards, but the two sweethearts were writing letters to each other every day for ten years. The Communist Party committee of the town, in which Ivan lived, learned about the man's postal love affair with a German woman and ordered Ivan to bid farewell to his love. Ivan wrote that he was getting married.

”It was a hard time for me indeed. I realized that we both belonged to absolutely different worlds. All my life was about my work and his letters. I got married when I was 47,” Lischen said.

The Soviet veteran did not venture to look for his beloved, thinking that she was leading her own life, that she probably had a family of her own. As it turned out, Lischen could not get Ivan out of her head during all those years: she arrived immediately, after Ivan called her.

”She dreams now to hold my hand, walk about the city and say that it was the true love of her life indeed,” Ivan Byvshikh said.

Ivan and Lischen think of themselves as husband and wife, although their relationship has not been officially registered yet. Frau Waldhem's husband refuses to divorce Lischen; the court will hear the case in three months. As soon as there are no obstacles left, the two elderly people will wed each other.