According to the UN International Panel for Struggle against Sexual Exploitation, the Russian army is plagued with male prostitution. A small amount of money is enough to find a Russian soldier-prostitute in the center of Moscow. 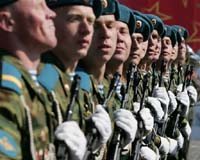 Servicemen may become male prostitutes in the Russian army for various reasons. There are young men who voluntarily offer sexual favors to their homosexual clients; others are forced into prostitution against their own will. Newcomers, especially those who finished higher schools before joining the army, suffer from sexual harassment more often than others. Brave soldiers try to protect their honor and rights, although there is no one to help them: commanders and military officials may often be involved in the sex business too.

“When I was standing on duty, two bullies came up to me and shoved me into the stockroom, a soldier serving at one of Moscow’s military units recollects. "They raped me there in turn. It was very painful and revolting. It didn’t take them much time to finish, but the next day I started noticing other soldiers giving me strange looks. I instantly realized that those bastards let everyone know what they had done to me. An officer came up to me one day and said to me point-blank: “Tomorrow you will to serve two clients.” I knew that if I said “no” then I would spend my last days spitting blood. But still, I told him “no.” When the officer heard that, he pulled out pictures of me being raped in the stockroom. “If you don’t serve the clients, you mother will see these pictures,” said he. I was forced into prostitution,” the soldier said.

Another serviceman, named only as Ilya, became a male prostitute during his second month in the army. The young man received a letter from his girlfriend. “The sergeant told me that day that I would no longer need girls. He and three other men forced me to go behind the barracks to the abandoned construction site. They made me kneel their, tied me up to a lamppost and hit me several times in the groin. The pain was so strong that I lost the will to fight them back. They made me open my mouth and raped me. I don’t remember how long it continued. When I came to my senses I didn’t want to live. I was seriously thinking about committing suicide. I was shocked that the rapists were visiting me regularly afterwards bringing fruit and vodka for me. When it ended they made me a prostitute,” Ilya said.

There were many incidents when soldiers prefer bid farewell to their lives being unable to cope with humiliation. However, military officials mostly say that such stories occur because of the unbalanced state of mind of the soldiers.

Solder Aleksey I. from the town of Taganrog was also going to commit suicide. He wrote a letter to his mother before: “Hello Mum. I have been raped like a whore. I have decided to kill myself. Please forgive me. I will hang myself, and nobody will call me a whore ever again. If I find out that my younger brothers will serve in the army too, I will curse you. I don’t want to live like a faggot. I hate myself.” The man’s attemptto commit suicide failed. He is now a patient of a hospital for mentally unbalanced individuals.

Pimps in uniform aim at bringing a person down and humiliating him. If they succeed, they make a soldier become either a passive or an active male prostitute (an active one is more expensive). Prostitute soldiers are divided into three groups in Russia: the secluded, the street boys and the affiliated.

Street boys are the most common and cheapest male prostitutes in the Russian army. They can be found in many places of Moscow during weekends. When on a leave warrant, the street boys wander about the capital looking for clients and offering sex services to them. They can be basically found in the center of Moscow: on Tverskaya Street, on the square in front of the Pushkinsky Cinema and in the Alexandrov Garden near the Red Square. Sometimes they can be found on railway stations too. They try to guess the sexual orientation of a potential client and approach him asking for a cigarette or a little money. Sometimes they ask to use a cell phone to make one single call home. Just a little attention to such a soldier is enough to make him start seducing the client. The conversation mostly ends with a quick oral action in a toilet nearby.

“The street boys don’t ask for much money. The majority of them come to Moscow from Russia’s provinces. They are ready to do anything for a bowl of soup or a cigarette,” a client (he asked to call him Igor) said. “When they return to the military unit, they share their earnings with bullies, who in their turn share with officers,” the man said.

Unlike street boys, the secluded do not spend their time rambling about Moscow and looking for clients. They gather in certain places of which their potential clients know – for example the monument to heroes of Plevna, otherwise known as Pleshka.

Pleshka is the most notorious place in the Moscow homosexual environment. Gays can be spotted their all day long, although gay prostitutes and their pimps appear in the evening time. Some of them put on military uniform and pretend to be soldiers. Such a “professional” asks for $300, although a genuine military man on Pleshka charges only 20-30 dollars.

The so-called affiliated army prostitutes make the biggest earnings in comparison with the two of the above-mentioned groups. They “serve” in their own military units waiting for clients in the barracks.

Finding an agent to establish a contact with army prostitutes is very easy. There are several websites on the Russian Internet that carry quite a list of adequate advertisements. However, going on a gay adventure in the military can be a risky endeavor. It is strongly recommended not to show money to soldiers before sex. “If they see the money they may kill you without giving it a second thought. Five hundred rubles ($20) is a whole fortune in the army,” a man who wished to remain anonymous said.

Express yourself on Pravda.ru online forum. Registration is free