The photo session of the banker's wife and her new role of a glamour model have made her the talk of the Moscow elite. It is an unprecedented action for a woman of her status which has given rise to both censure and intense interest. 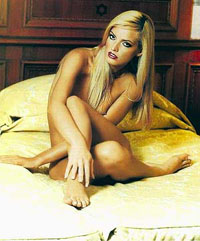 Olga, a graduate of a commercial school, posed nude embracing a plush bear and also lying on a Soviet propaganda poster with policemen standing around. There is also a picture in which Olga has just sun glasses on; she stands under the portrait of Soviet leader Leonid Brezhnev and recruits stand in a line to caress her.

The Moscow elite was even stronger shocked with the reaction of Olga's husband Sergey Rodionov, a banking and publishing magnate. It is said that the husband approves of his wife's doings and even paid for some of the photo sessions himself.

Sergey Rodionov, 44, says that he was the first who took a nude picture of his wife. Some of Rodionov's business partners interpret Olga's behavior as adultery. “I tell my wife that rumors will die away soon, and the pictures will remind her of her young beauty even at the age of 90. I feel proud of her,” Sergey says.

Many of Russian men love to demonstrate the physical beauty of their wives. But the photo session of Rodionova is a sensation for the Moscow elite.

A man belonging to the Moscow elite says that a beautiful young wife is an obligatory attribute of every wealthy man in Russia. This is a peculiar feature of the status, which goes along with as a villa in the south of France, luxurious cars and bodyguards. But it is generally believed that rich men's wives must look gorgeous and buy expensive clothes but not take them off for career's sake, the man adds.