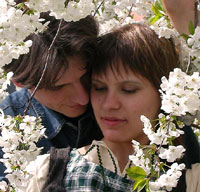 Russian couples reluctantly define the type of their relationship. Young people do not like to be responsible and at the same time irresponsible for the state of partner relations. In most cases, Russian young couples today identify themselves not as mere liaison any longer but not as a family yet. In other words, they are more than lovers but still less than husband and wife. Who are they then?

Sociology researchers define the sexual behavior tendency of the Russian youth today as "multiple monogamy," which is in fact compromise between the family happiness and the advantages of free love, says Yoki.ru. In this case faithfulness of partners is the thing that actually matters. Young couples may live together or have steady dates; they are economically independent or keep house together; they spend weekends and vacations together. Such people love each other but at the same time they admit there may be several loves; they easily stick to another love story in case the previous is exhausted.

It was just several years ago that parents, sociologists, sexologists, teachers and publicists spoke about the horrors of total promiscuity; they stated the very notion of a family would be soon extinct and said the country would suffer serious demography problems as a result of AIDS, hepatitis, sterility and early ageing of the population.

Stability and freedom are rather the most popular intentions of these days.

Sociologists state that 69 per cent of young families in Russia live below the poverty line. They add that marriages of convenience are the most stable ones. However, love is still the strongest reason for young people in Russia to make families. Majority of marriages in Russia are marriages for love.

In Russia, 44 per cent of young couples wishing to marry plan to live with their parents; at that, 37 per cent of them have not yet informed their parents of this intention. Experts say that young people usually manage to keep their families within three years in case they share apartments with their parents. It is not good for young families to have someone else of an elder generation living in the same apartment. Russia seems to be the only country of the world where many parents maintain their children till their last day.

Opinion polls reveal that often newly wedded men and women have different views as concerning their future family life. The discord makes up 28 per cent, the showing which in the course of time will easily break such families.

The Russian State Statistics Committee predicts that the Russian population will drop by 11.6 million people by 2016. Living alone in Russia today is easier from the economic point of view. Young Russians begin to realize that they first should earn enough money to have a family and then marry.