- The American version of St. Nicholas, or Santa Claus originally came from the Dutch version called Sint Klaas. The Dutch settlers in New Amsterdam (New York) brought this fun and lively tradition (some even say cult) to America. 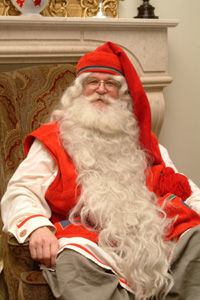 - In Greek, St. Nicholas is known as Hagios Nikolaos, Bishop of Myra (in the present day Turkey )

- In England , his name is Father Christmas , where he has a longer coat and a longer beard.

- In Germany , children get presents from Christindl, the Christ Child.

- Nowadays the Joulupukki of Finland resembles the American Santa Claus.

- In Brazil and Peru , Santa Claus is called Papa Noel.

- In Italy Babbo Natale, which means Father Christmas, is Santa.

- In Morocco he is known as Black Peter

- In Sweden Jultomten visits the evening before Christmas day, pulling a big bag of julklappar (Christmas presents) in the deep snow.

- In the Netherlands , he is called Kerstman.

- In Russia , he is called Grandfather Frost that is "ded moroz" (the second "o" has its accent and the last "z" is pronouned as "s".)

- He is also called Kris Kringle - which comes from the German term "the Christ Child"
(Christ Kind).