The cousin of Raisa Gorbachev, Mikhail Gorbachev's now-deceased wife, lives in a remote Russian village and dreams about a wheelchair

When the little girl was born, a midwife was shocked to see that the child was born with serious physical defects: the little girl had only one leg and no arms. Doctors diagnosed so-called Adam Syndrome: the pathology results in the detachment of limbs when a baby grows in mother's womb. The girl's mother burst into tears, when she saw her child. The father firmly said that they would raise what God had sent them. The girl was named Lyubov. She is 52 years old now. 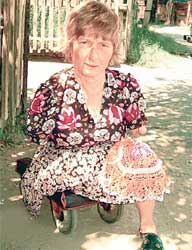 The girl was growing like any other child, paying with dolls and other kids. Lyubov proved to be a smart little baby; she was happy to go to school and finished it as a straight-A student. When the girl's mother died, her father remarried; the girl could not get along with a new “mother” in the house. Lyubov decided to pack her things and move to a local nursing home, where she met her true and the only one love of her life.

Anatoly found himself in the nursing home after he had worked at the construction of the Baikal-Amur Main Line: the young man had his toes frostbitten. “I had to answer his tokens of attention in a week. We were happy together. My husband was taking me out every weekend; we would travel across Russia a lot in summer too. He even took me abroad once, to Germany,” Lyubov said.

The young family of disabled people became parents to a healthy little girl soon after the wedding. “We were worshipping our little girl. She was the sweetest little thing. When she was six, they had an accident in the kindergarten. Fifteen children suffered from severe food poisoning. My daughter was poisoned to death.”

Lyubov's husband, Anatoly, with whom she had lived for 21 years, died of cancer.

The grieving crippled woman had to take immense psychological and spiritual efforts to handle the pain. “I started doing needle and stitchwort. I took a knitting needle and started knitting. Everything was working out just fine. I was knitting clothes, table cloths and other things. Then I mastered the art of embroidery,” Lyubov said.

It is hard to believe that the woman had made all those things only with the help of her two toes. The woman's biggest dream is to acquire an electric-powered wheelchair. Lyubov has to suffer from horrible pain in the back and her only leg every time she returns home after a walk outside.

Lyubov keeps several photographs of Raisa Gorbachev, the now-deceased wife of the ex-president of the USSR, Mikhail Gorbachev, in her house. “She is my cousin. My mother and Raisa Gorbachev's mother were sisters. My aunt would always tried to help us with money and food. She bought us this apartment too. I am eternally grateful to her,” Lyubov said. I have met her in person twice, when she already was the first lady of the USSR. She came to visit me alone, without her husband. She was a very nice woman. She invited me to come to Moscow. I have never met anyone of the Gorbachevs after she died. I do not want to trouble Mikhail Gorbachev and remind him of my existence. His daughter, Irina, asked me to send them my picture. So I did and that was it. Why would I bother them?” she said.