The latest CD by the well-known Russian pop group Tatu gave rise to a scandal recently. The CD is titled “Lyudi-Invalidy” (disabled persons in Russian). Leonid Vokuyev, an ombudsman in Russia’s Komi Autonomous Republic believes that the lyrics of the album’s title track are a public insult to the disabled. 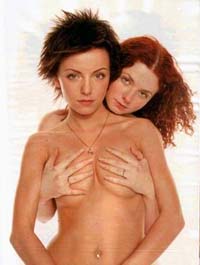 According to information obtained by Moskovski Komsomolets, several disabled persons in Syktyvkar, the republic’s capital, wrote a letter to Vokuyev, in which they strongly objected not only to the lyrics of the song, but to the record sleeve as well. The record sleeve contains the following line notes: “The disabled don’t know what it takes to be a human being. The disabled are just a counterfeit built around the humanoid dummy. The disabled do not live, they just function. Their functioning complies with the law of mechanics and four more characteristics, namely, cruelty, stupidity, greed and baseness.” Vokueyv supports the indignation of the disabled. He demanded that the Moscow prosecutor’s office institute a legal action against Tatu’s singers Yulya Volkova and Lena Katina in order to hold them responsible for libel and public insult.

“Actually, gave it a thought while working on the concept of the album. We were thinking over a possible impact the lyrics might have on those with physical handicaps. By no means had we intended to insult them or treat them inappropriately so we put a definition of the “disabled” on a booklet enclosed with the album. No doubt about, the definition concerns the persons whose soul is flawed. The same interpretation should be applied to the lyrics of the song,” said Yulya Volkova.

“Incidentally, we believe that the term invalid is absolutely inappropriate with regard to persons with physical handicaps. The word sounds too gross and humiliating to a disabled person no matter what has caused them,” said Lean Katina.