A cardiac arrest lasting for more than 3 minutes normally results in death. The girl's heart did beat for 6 minutes

Larisa Zimnuknova was a sprightly child. She liked climbing across the trees and picking fights with boys of her neighborhood. Later she graduated from a medical school and became a paramedic. Larisa joined an ambulance service. She never thought that she would need emergency medical attention one day. All of a sudden she began suffering from a terrible pain at the back of a lower abdomen. The doctors examined the girl and announced her diagnosis: kidney ptosis. They said that a surgical operation was imminent. Larisa was 19 years old at the time. 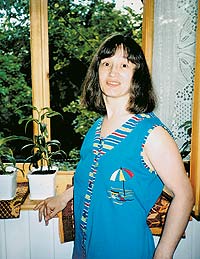 Larisa was admitted to hospital. But destiny seemed to be against the surgical procedures. The operation had to be postponed three times for various reasons ranging from an emergency decontamination in the hospital to a quarantine imposed on a surgery ward. Then a surgeon refused to perform an operation on October 13th  due to superstition.

Things went wrong from the very start on the day of the operation. An anesthetist was missing. He took a day-off to attend the funeral of his father. “We can do without him, we are not going to put off the operation one more time,” said a surgeon. His decision proved to cause dire consequences for the patient.

Larisa was apparently given an insufficient dose of anesthetic prior to the operation. She twitched her body responding to pain as the operation went under way. Then she got another shot of an anesthetic drug. Her pulse and blood pressure dropped shortly after the shot. The patient's heart stopped beating. Larisa was urgently wheeled off to a resuscitation room.

A cardiac arrest lasting for more than 3 minutes normally results in death. Larisa's heart did beat for 6 minutes. The doctors succeeded in putting it back in motion, but the patient remained unconscious. The doctors at the Novocherkassk city hospital tried hard to awake her yet they gave up seven days later. Larisa was transferred to a regional hospital in Rostov-on-Don. The girl spent there a few weeks but to no avail. The patient was breathing, her heart was beating, but she was completely unaware of her surroundings. “She will probably last for another year or two,” said a doctor to Anastasia, Larisa's mother, when she asked him what was in store for her daughter.

Orderlies were wheeling Larisa off to the hospital's yard. A beam of warm autumn sunshine touched her face at that moment. She opened her eyes for a few seconds and said: “My No 5 is around, it is good.” Larisa meant the ambulance No 5 of her former ambulance team. Back at her work she used to travel in that vehicle responding to calls. Now she was a comatose patient  and the ambulance No 5 was about to move her to Novocherkassk.

Unfortunately, a flash of consciousness was very brief. The patient passed out a minute later. Anastasia hoped that her daughter's colleagues in Novocherkassk would be able to revive Larisa. Many medicines were in short supply in the USSR back in 1979. Head doctor at the Novocherkassk hospital furnished Anastasia with a note requesting medical authorities in Rostov-on-Don to issue her a few ampoules of badly needed injections. She still remembers her shock and dismay when she overheard a nurse say: “I do not think we should keep on wasting medicine on Larisa, her brain has been long gone, I wonder why her mother can not realize the fact.” But the mother refused to believe that she had lost her daughter. She painstakingly followed all recommendations of the doctors, day in and day out.

“Lie down with me for a while,” Anastasia heard her daughter speaking one night. Larisa had kept silent for months. Anastasia did as told. But her daughter's look on the following morning was as blank as it was before. Larisa did not recognize her mother.

All things come to those who wait or so the saying goes. A miracle happened two years after the ill-fated operation. The sun was shining brightly outside the hospital windows. Larisa woke up and asked her mother pretty nonchalantly: “Listen, it is my twentieth birthday tomorrow, are we going to have a party?” Anastasia went numb when she heard the question. Larisa was to undergo an operation several days prior to her anniversary. Larisa seemed to remember about her birthday two years later.

Little by little, she began to regain her memory. The events of her childhood and school years were rewinding easily in hear head. Still, it was torture for her to realize that she could not recall the beginning of a movie she just saw on TV. A two-year slumber wiped clean her abilities to read, write and do simple arithmetical computations.

Her mother brought her a set of child's bricks. Brick by brick, the two of them were making up words using different bricks denoting a water melon, apple, rabbit etc. Larisa had to learn how to hold a pencil again. Her mother held her tight like a toddler as Larisa was regaining her walking skills.

Doctors and other people often asked her about her afterlife experience. Larisa always said that she had not seen any tunnel or light at the end of it. All she could recall was a feeling of lightness as though she was floating weightless and happy, and she did not want to part with those high spirits.

I met Larisa and her mother in Novocherkassk. They live in a small two-room apartment. I saw a stylishly dressed woman who did not look her age. She looked as if she had been in her twenties. In actuality, she is 45 years old. The place looked very nice and tidy with lots of flowers on the windowsills. As it turned out, it was Larisa who normally looked after the house.

I asked her if the dramatic events had brought out any extraordinary talents in her. She said no, nothing special, save for some beneficial effects on her physical health. She does not catch colds or respiratory diseases these days. She feels pain in her kidney at times. The doctors did not fix the kidney properly during that disastrous surgery. Larisa enjoys watching soap operas. She could not earn a degree in medicine (she wanted to become an epidemiologist when she was 20). The doctors banned her from studying too much.

She did not get any employment either. Her mother did not like the idea at the beginning, now Larisa is afraid to step out of the house on her own.

Larisa did not find her Mr. Right who could have shared her destiny. A soul mate is very hard to find in her case, anyway. She does not have a computer hooked up to the Internet. It has been a long time since she went on vacation. Years ago, when she became a news item and the press spread her story far and wide, she began to receive loads of letters from her “companions in distress” who also survived coma. Larisa says that sometimes a nagging question pops up when she feels depressed: “What did the Creator save my life for?”

Larisa arrived at the only conclusion after searching for answers for many a sleepless night. “It would be a good reason for me to go on living if my story could raise hopes in one particular patient,” said she.

“Opposing those who said that Larisa's brain had been long 'dead' seemed to be the most difficult part of the treatment. Negative prognoses were based on data provided by medical equipment. Her EEG looked really awful: 'Gross diffusive changes of the brain with stem structures being involved in the pathological process.' The brain destruction process is a combination of many factors. There is an increase in permeability of the blood vessels' walls which often results in brain edema and eventually causes intracellular self-destruction. These days resuscitation specialists can apply a wide range of methods to combat that destruction. We used every single chance trying to enhance the body's resources for recovery. We applied numerous methods including brain cooling technique and a number of physical therapies. Therefore, I would not call the treatment of Larisa a success by a fluke. On the other hand, it takes a lot of time and effort to treat patients with such a diagnosis.”

On the photo: Larisa Zimnuknova