An unusual and even extravagant reason made the other day an ordinary male from Moscow change his sex. The man risked to stand a sex-change operation to change his sex because of envy and unwillingness to maintain his family. What is more, his ex-wife states that the man decided to become a woman not to pay alimony to his child after the divorce. 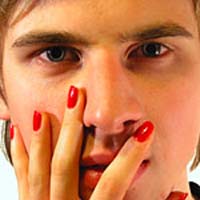 Oleg, this is the name of the former man, says it is a perfectly attractive idea to live in a way many women do, in other words to get financial maintenance from men. “As for me, I maintained two wives but both abandoned me. Now I want to try living in a female way,” Oleg says.

The idea to change his sex came to Oleg soon after the divorce with his second wife. The idea to become a woman occurred to Oleg even earlier when he liked to sport women’s dresses. He loved to wear his first wife’s clothes. Once the wife saw him trying her clothes on and was terribly shocked. Being absolutely sure the husband was inadequate the woman divorced him. When divorced, the woman kept Oleg’s apartment and regularly got alimony for the son. Now Oleg’s first son is 18.

After the divorce, Oleg several times visited transvestite shows hoping to find friends or sexual partners there. But he never succeeded. At one of transvestite shows Oleg met his second wife, a fashion model Christine. He fell in love with the girl who was fifteen years younger than he and married for the second time. The young wife revived Oleg’s interest in life and made him more sexually active.

But soon the man realized that his life with the new wife was rather problematic. He was sure that money was the only thing the young woman wanted from him and decided to divorce. It was right after the second divorce that Oleg suddenly arrived at a conclusion that being a woman was a wonderful life. “Just be beautiful and get love, money and care for this beauty and give nothing in return,” that was his sudden conclusion about women’s life. When Oleg divorced his second wife, their three-year-old daughter stayed with the mother.

The man is sure he could be a beautiful woman with his height of 178 cm and weight of 65 kg, ideal characteristics for being a fashion model. And he believes his life would have been fabulous if he were a woman.

But it is important to forget the fashion career plans now as Oleg is old enough for this type of a career. He should better think how he will recommence work in the office when becomes a woman after an operation. Shortly before the operation Oleg gave up the position of a top-manager in a big company in Moscow and started his own computer business. His colleagues are men only who used to be Oleg’s classmates, co-students at the institute or friends. The man says that all of them know about the operation but not unanimously approve of the idea. However, Oleg hopes that he will succeed and establish mutual understanding with his male colleagues and friends.

It seems to be a harder thing to meet with the children again after the operation. Oleg says that his second wife insists that he wants to change his sex to evade paying alimony. And what is more, the young woman called Oleg a pervert and prohibited to meet the daughter. But Oleg says he has no plans to give up paying alimony to the children. When Oleg’s 18-year-old son learnt about father’s decision to change his sex he just turned his back on him.

Oleg complains that his male life is a failure. “I was maintaining my women all the time but they are sure I still owe much to them,” he adds. He is sure it is time for him to become weak and wants to be loved without giving money.

A journalist of the Moskovsky Komsomolets newspaper met the man some time later in a hospital ward after an operation when Oleg turned into a woman named Olga. In eight days she had to leave the hospital to begin an absolutely new life. In a month Olga will be able to live her ordinary way of living and even have sex as a woman in one month more. The new woman has already got a new passport that proves that she is actually a female. She got the document before the operation. It took quite a lot of time for Oleg to change documents for new ones indicating his new sex and collect references from doctors. He first had consultations with a sexologist, then with endocrinous experts and even a psychiatrist. All of them persuaded Oleg not to have an operation. Psychiatrists can even prohibit having a transsexual operation if diagnoses a patient as suffering from schizophrenia, imbecility or homosexuality. Doctors registered none of the above diseases with Oleg and allowed having the operation. And even when Oleg underwent sedative and antidepressant therapies he still wanted to change his sex. He would not give up the idea of becoming a woman even when doctors warned he could live for thirty years at most or even ten years being a female after the operation. “Let my future female life be very short but I want to live it being in harmony with myself,” Oleg said.

The operation lasted for several hours and cost $8,000. Today, primary sexual characters prove that Olga is a female. When the patient undergoes hormone therapy her voice will be softer, the features are to get smoother and the body more feminine.In six months Olga plans to have a painful and complicated feminine plastic surgery that is to polish her turning into a more beautiful woman.

Olga already has a transsexual partner with whom she wants to have a new family and even dreams of having children. The RF legislation does not prohibit transsexual partners have families. Olga’s only desire today is to have a harmonious life in her new transsexual family. She says she will do her best to be happy as it is impossible to change her sex once more and turn into a man again.

Surgeon Sergey Anisimov comments that a transsexual operation is one of the most complicated surgical operations and requires a special permission of a medical commission. A patient’s desire to change his sex is not enough for having such an operation. About ten patients wishing to change their sex come to the hospital where the surgeon works every month. But only two or three people achieve their goals and change their sex within six months. Male patients wishing to become women are more frequent. These patients identify themselves with females and cannot live in harmony with the male world. The expert believes that transsexualism is not a mental disease, it is rather an abnormality. Oleg is to some extent is a unique patient as men having families and children usually do not change sex. He is the first man who decided to change sex because of his unhappy private life.

Become a member of Pravda.ru English Forum for free