Russian Casanova cheated on his 8 wives and 64 lovers

Valentin Kudryavstev had 8 wives and 64 lovers. The lustful man fell into a habit of starting new relationships from scratch. His marriages did not last long. Valentin would go to a registry office after receiving a new passport. As for his lovers, he would dump them rather unceremoniously. He even sold one of them for 800 rubles (about $26). 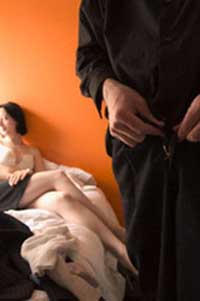 Russian Casanova cheated on his 8 wives and 64 lovers

Valentin’s first wife was a freckled daughter of his parents’ old friend. The parents of a new couple worked for the same company. The fiancée’s father was a chief engineer while the mother of the fiancé was a chief accountant. It was a dynastic marriage, so to speak. The wedding was conducted on the day when the fiancé turned eighteen.

“Well, I was eighteen on paper only. I tampered with my birth certificate after dropping out of high school at 14. The legal age for getting a job was 16 at the time. So I changed my year of birth. I got married and was called up into the army two years before my time,” says Valentin.

Valentin figured out that the marriage would give him an excellent opportunity to get way from the persistent parental care. His plan seemed to work. The newly wed were soon provided with an apartment of their own. But his family life became a drag. Valentin was about to walk away when his wife gave birth to a daughter. The spouses kept sharing the apartment for the benefit of their offspring. But his relationship went from bad to worse. One day Valentin decided to call it quits.

“My wife cooked me a lousy dinner that day. I have to admit that I used it as a pretext for parting company with her. I just grabbed my belongings and slammed the door. I haven’t seen her ever since. You know, I never look back,” says Valentin.

He met Rita Votler, an ethnic German, while he was a married man. Rita was not a dropdead beauty. But she had large shining eyes that most men found very attractive. They started dating shortly after Valentin got a divorce. They got married one year later.

One night Valentin spotted his young wife at a bus stop as he was going back home from work. He also saw a man who was apparently hitting on her. His wife resisted the advances but she never told Valentin about the accident. “She wasn’t used to complaining,” says he. “I knew what I should do. And I did it my own way. I tracked down the offender and taught him some good manners. Needless to say, I used my fists as a teaching aid,” says Valentin.

Valentin was good at martial arts so the fight was quick and violent. The police happened to witness the incident, and Valentin was taken into custody as a result. He was tried and sentenced to one year in prison, Reportyer reports. Valentin became a father of two while doing his time.

Valentin’s little son and daughter did not seem to change his behavior in terms of faithfulness. He kept seeing other women. Rita refused to put up with Valentin’s pleasure trips, and asked him to leave. He never hesitated to do as told. Just like before, he threw away his passport and decided to start a new life. He applied for a new passport and got it soon. His new passport had no registry office stamp showing his marital status.

Valentin decided to settle down in Uzbekistan. He says that he felt like a sultan out there. He had a good job that paid handsomely. He could afford to have several relationships at a time. He says that he married some of those women, others were simply lovers.

He claims to have had 64 lovers in total. According to him, he still remembers all of them by the names and distinctive marks.

One of his lovers fell in love with a local man. Valentin was not aware of the relationship but he agreed to relinquish the woman to the other man who paid him an 800-ruble kickback in line with the local tradition. Valentin Kudryavtsev was officially married six times more. All those marriages were childless and did not last long. On the other hand, he never bothered to get a divorce prior to registering another marriage. He started his life as if from scratch for six times.

Valentin’s amorous adventures bore a hole in his pocket. He feels emotionally exhausted too. He always walked out on his women leaving everything behind, a part of his soul inclusive. At the end of the day, he found himself totally alone. These days he is a senior citizen with a brand-new passport. He is still officially single. Incurably romantic, Valentin still hopes to find the love of his life.