Ghost of Lenin sighted in the Kremlin

Walking on his own 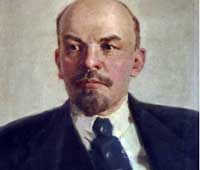 Ghost of Lenin sighted in the Kremlin

“The ghost of Vladimir Lenin was first seen at the Kremlin in the small hours of October 19, 1923. The incident took place about three months before the Bolshevist leader passed away. In fact, Lenin was gravely ill at the time, he stayed within the confines of Gorki, his residence outside Moscow,” says Alexander Gorbovski, a historian and writer. “A former courier of the Kremlin dispatch department told me the story. By accident he eavesdropped on a telephone conversation. That night he dropped by the guards’ office for a cup of tea. He heard a duty officer asking somebody on the phone: ‘Can you tell me why Lenin has arrived in the Kremlin on his own? I’ve just checked the situation. There are no guards whatsoever. Okay then. I’ll call Security in the Gorki residence.’ Then the courier heard the officer making another call: ‘Security at Gorki just confirmed Lenin hadn’t left the residence today. They say he’s in Gorki. Yes, they’re pretty certain’,” adds Gorbovski.

The strange incident greatly puzzled members of Lenin’s entourage. According to the doctrines of Marxism-Leninism, there is no such thing as ghosts. However, there were many eyewitnesses of the appearance of Lenin’s “double” at Red Square. Those numerous eyewitnesses had no idea that Lenin had been actually in Gorki at the time. So the authorities had to make up an official report about Lenin’s last visit to Moscow in October 1923.

“I’ve no doubts that people in the Kremlin really saw the ghost of Vladimir Lenin on that night,” says Gorbovski. “There are too many discrepancies in the memoirs by Nadezhda Krupskaya (Lenin’s wife – ed. note) and those penned by Alexander Balmas, Lenin’s personal bodyguard. The above persons allegedly escorted Lenin during his visit to Moscow. Krupskaya claims that Lenin spent a night in the Kremlin and got back to Gorki on early morning of October 19th. According to Balmas, Lenin spent the entire October 19th riding about the town. Balmas says Lenin also visited the Agricultural Exhibition on that day. As regards Krupskaya’s account, I have a question.Why did Lenin make a trip to Moscow in the first place? Did he really arrive in the Kremlin for walking about its long corridors and taking a nap in his apartment? Balmas’ version doesn’t hold water at all. The witnesses saw Lenin walking on his own, without any guards in sight. How come he had no guards alongside of him during that visit? By and large, the visit seems completely purposeless,” says Gorbovski.

Lenin’s state of health had deteriorated by the fall of 1923. He suffered from paralysis in his left arm and leg; it grew worse after his illness struck back six months earlier. Following a course of treatment, Lenin recovered a little; he could walk using a walking stick. On the contrary, the “ghost” was reported to have moved swiftly and energetically. According to Biographical Chronicles, Lenin “climbed the stairs and visited his apartment and study,” and “visited the Council of People’s Commissars before taking a stroll in the Kremlin’s courtyard.” By the way, the above source claims that a “detachment of cadets greeted Comrade Lenin as he walked across Red Square.” Needless to say, there is no mentioning of any walking stick in the account.

Footsteps in the night

“Two years ago I worked at the President’s Archives located in the Kremlin,” says Sergei Kuleshov, a historian and colleague of Gorbovski’s. “I was having my lunch one day in a canteen. A friend of mine introduced me to a gray-haired gentleman who sat at our table.

He was a KGB colonel in charge of security of a building hosting Lenin’s former apartment and study. We were making jokes with regard to the supernaturalas we ate our lunches. Suddenly, the KGB manstopped smiling and told us a story about footsteps and other strange sounds coming from Lenin’s apartment at night. He said that that his colleagues and he had repeatedly heard the footsteps and sounds that resembled those produced by furniture being shuffled around the floor. The sounds were coming from Lenin’s study, which was locked and sealed, not to mention a number of guards who watched it round the clock.

“The incidents took place in the summer of 1993,” says Alexander Gamov, Komsomolskaya Pravda columnist who published an article on the subject in 2005. “Filatov’s office was located at the second floor of the presidential residence. The memorial apartment of Vladimir Lenin was right above his office. Well, Filatov had no second thoughts about the place at the beginning. He’s said to have visited the apartment as a tourist once or twice. He was burning the midnight oil when he heard the creaking of floorboards above his head. According to him, it sounded as if somebody was nervously pacing up and down the place. Filatov simply ignored the sounds for the first time. He heard more creaking sounds some time later as he worked until late at night. He called Security and asked them what was going on in Lenin’s museum at night. The guards assured him that there was nobody upstairs since they personally locked up and sealed the museum every day. ‘You’d better have another look around the place. It’s in close proximity to Yeltsin’s office, can’t you see?’ said Filatov. The guards did as told and conducted a thorough inspection of the apartment and study. Needless to say, they found no one out there. Filatov stopped worrying or so it seemed. But he also stopped staying up in his office. He apparently preferred to be on the safe side should anything weird happen again,” says Gamov.

“An acquaintance of mine, a student of the Moscow State University, has recently seen the apparition of Lenin at Oktyabrskaya Square in Moscow,” says Igor Vinokurov, cochairman of the Commission for the Study of the Mysterious Phenomena. “The student claims he could clearly see Lenin passing by, he could see his facial features, his trademark beard. The student was thunderstruck and froze in the cobblestone. Apparently, the ghost did not like being watched so he ‘stepped back’ into his monument and disappeared,” says Vinokurov.

They say that the ghosts of famous historical figures appear among the living in troubled times. The ghost of Napoleon in red uniform with a candle in his hand was often sighted in Paris on the eve of the 1848 French Revolution. Hopefully, the ghost of Lenin appears in our time just to look around and get an idea of Communism-free reality.

Other ghosts seen in the Kremlin

The apparition of Ivan the Terrible seems to have a weakness for the Kremlin. The ghost of the tyrant has been traditionally thought to be a portentous sign to the authorities. The ghost was reported to be lit up with the flames of ominous red color. The ghost made frequent appearances in the Kremlin shortly after the death of Alexander III as Nicholas II was yet to ascend the throne. Some of the letters by the Empress Alexandra Fedorovna contain references to the ghost of Peter I, which was seen wandering through the Winter Palace in Saint Petersburg. The ghost of Catherine II was regularly spotted in Petergof. The staffs of the Russian State Archives often see the ghost of a woman in white dress. The ghost appears near the shelves holding the documents pertaining to the House of Romanov.