Woman in coma reacts to children's cries after 2 years

Woman giving birth to twins while she was in a coma heard the babies’ voices and opened her eyes. 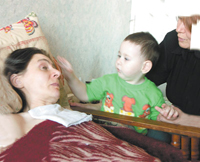 Woman in coma reacts to children's cries after 2 years

A ray of hope appeared in the sad story of Nina Guseva who entered coma right when she was ready to give birth. Woman from Southern Ural region never had a chance to see her little children, but after one-and-a-half years following the tragedy children’s mother began reacting to their voices: she opened her eyes.

Nina Guseva ended up in a coma after receiving too much medication while having difficult and very complicated childbirth. The children were born healthy but their mother didn’t recover. Nina’s husband took his sleeping wife home from the hospital and has been taking care of her at home for over year. Maxim and Anastacia play every day by their mother’s bed but she cannot hug them nor kiss them. Yet her heart answered the children’s voices.

Doctors in Cheliabinsk were right in saying that Nina should not be separated from her kids.

“Only a mother’s instinct will be able to bring her out of a coma,” they told her husband Vladislav, “That instinct is the strongest drive in the world.”

And that was exactly what happened. Maxim fell down and cried so loudly that his mother’s eyes opened. At first the relatives thought that it was a mere accident. The children’s grandmother began feeing Nina with Maxim’s bottle.

But the miracle was repeated. The mother responded to the children’s cries again, looked at them and moved her lips in an attempt to say something to them.

“I almost lost my consciousness from joy,” Nina’s mother Tatyana recalls through the tears, “The kids were playing right next to her when it happened.”

Suddenly Nina blinked, as if being awoken from a long sleep. She opened her eyes with much difficulty.

“My daughter, my dear, are you awake?!” Tatyana was asking of Nina who could only move her lips without being able to make a single sound, “What are you trying to tell me?”

Then after two years of absence Nina regained consciousness. Nina’s mother grabbed the children and exclaimed, “Look, these are yours. See how beautiful they are!” But Nina passed out again.

“That day I could not calm down,” Tatyana explained, “I couldn’t wait for my son-in-law to come home. It was as if she was trying to encourage us and to give us hope; to tell us to hang on because she was alive and she was with us.”

When Vladislav came home from work that night the grandmother told him what happened. He was all over the place – running up to his wife, then to the children, then circling frantically around the apartment. Finally he sat down and broke into tears.

“Nina, my darling! She feels our children with her heart and she is trying to come back to us,” the man exhausted after two years of fighting for his wife’s life told his mother-in-law, “And we can’t help her! Nina must get to Moscow, she needs best medical treatment, but I have no money. What am I to do?”

After that one happy day Nina remained motionless in bed for one more week. Then suddenly one day when her mother was busy with the children in the room Nina opened her eyes again.

“From overwhelming emotions I did not know what to do or say,” Tatyana recalls, “She was trying to say something again and again, but she couldn’t. Her eyes searched the room. She would look at me, at the kids, then would just stare into space.”

Since that time Nina began responding to her children regularly. Whenever they come into the room she opens her eyes and answers their calls. And the kids keep asking her to wake up.

Maxim and Nastacia will turn two in January, and they look like exact copies of each other. They daily come up to their mother’s bed and begin calling her, as their grandmother had taught them.

The children intuitively understand that Nina is someone very close. They pet her with their tiny hands and tell her to get up.

“It breaks my heart to watch this,” Tatyana says, “The little ones are growing up without their mother’s care. But Nina was expecting their birth with such love and excitement.”

“There is obviously some progress,” adds Vladislav, “But Nina cannot find the strength to recover on her own and she needs professional help. When she opens her eyes and tries to speak to us it seems she asking us to help her. But I can’t do anything! With the money I saved up last time I bought a very expensive medicine which no one knows how to use. So here it sits uselessly on the shelf.”

Valdislav and his children have no one to turn to but God and hope for people’s compassion.

“Nina feels us,” the man insists, “I tell her the news every day… Her face literally lightens up when I talk about the children.”