Alexander Barinov has been knocked off by a train twice yet he escaped both accidents unscathed. He apparently ran out of luck during the third accident. The paw of his favorite dog got stuck between the sleepers. Alexander helped to release it and pushed the dog off the tracks. He had no time to move away from the incoming diesel locomotive. 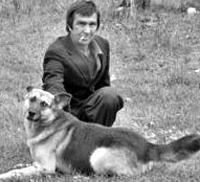 Alexander Barinov has become something of a legend for railroad workers at the station of Khvorostyanka of Dobrink district. Many people just envied him for his extraordinary ability to remain unharmed during potentially deadly railroad accidents. During the first accident he stumbled and fell on the tracks as a locomotive was rolling down the hill. An engineer slammed on the brakes but it was too late to avoid the collision. The train knocked Alexander off the tracks. Eyewitnesses could not believe their eyes when they saw the man get up and start waking as though nothing had happened to him a few moments earlier.

Alexander had another accident while stepping over a railroad crossing in the town of Lipetsk. “We had lots of freight trains clanging down that section of the road that morning; it was pretty noisy when he started moving across the tracks. Apparently, he never heard a train moving right behind his back. So it dragged him a few meters until the guy managed to slip off his jacket. Fortunately, all he got was a scratch on the back,” says Tatyana, a railroad worker who saw the accident.

By a strange twist of irony, Alexander’s house sits in close proximity to the tracks. He says that he was down on his luck during the third accident involving a train. “You know, I’d been a lucky bastard till that day. I was nearly killed by a cedar tree once, then I narrowly escaped being run down by a log truck. It’s true I got hurt real bad last time. But I saved my dog, my Verny, and that’s the only thing that matters,” says Alexander.

Verny (Russian for "faithful") was a little puppy when Alexander’s friends gave it to him as a birthday present. The dog is a crossbreed of the German shepherd and Moscow guard dog. Alexander was quickly enchanted by the creature, which he named Verny.

On that fateful day the dog ran out of the courtyard to welcome him master. One of its paws got stuck in between the sleepers. Alexander rushed to help his buddy, which was whining in pain and fear. “It took me several minutes to set him free. That train came out as I was finishing the job. I managed to push the dog away from the tracks. But it was too late for me to crawl aside. It hit me and I passed out on the spot,” says Alexander.

He came round in hospital several hours later. Alexander survived the collision. But damage was done. His right arm was cut off by the locomotive. He had to spend two weeks in the intensive care unit. However, Alexander did not turn into a living wreck because of his trauma. He says he can do anything using his left hand these days. It is probably running in the family since his grandfather is said to have earned a reputation of a fine hunter after losing one of his arms in an accident too, local newspaper Provintsialny Reportyer reports.

Nevertheless all the misfortunes, Alexander still believes he is a lucky man. According to him, his mother’s prayer protects him from Grim Reaper. And his favorite dog is still as faithful to him as he was before.