Jennifer Lopez (hot pictures) arrived in Moscow to personally congratulate the owner of Moscow’s Cherkizovsky Market, Telman Ismailov. Rumour has it that actress and singer Lopez has been paid one million dollars for that noble mission. The proud holder of the world's most expensive backside has arrived in Moscow in a company of her ex-boyfriend, Puff Daddy. 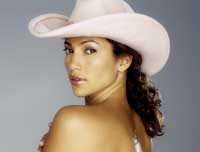 It was originally believed that JLo was going to open another boutique of hers in Russia’s capital. However, the rumours did not prove to be right afterwards.

The star has arrived to give her sincere congratulations to Telman Ismailov, the director of one of the largest markets in Moscow. It seems that Russian oligarchs have a new hobby now: they like to invite world-famous artists to their private VIP parties and ceremonies. Shakira, Sting, Kylie Minogue, Ricky Martin and Mariah Carey have already been to Russia for such purposes. Wealthy Russians usually pay one million dollars to the stars. A similar amount has been wired to JLo’s account too.

There is no precise information on whether Puff Daddy has received anything from Russian oligarchs. He is rumoured to have received a smaller amount than Jennifer, although it is not ruled out that the rapper has arrived in Moscow just for the company.

Lopez arrived at one of Moscow’s most luxurious hotels, Baltschug Kempinski. However, the singer was dissatisfied with the view of the hotel’s penthouse that had been booked for her. Lopez changed the hotel and went to entertain Ismailov, who marked his 50th anniversary on October 26.

Ismailov may not have invited the US singer for his birthday party himself. It was probably a friend of his who decided to give such an outstanding and expensive present to the official.