Husband punished by ghost for being unfaithful

After having to bury two husbands Anna Kalinina stopped expecting good fortune. Then she met Pavel Krivin, and her hope was re-born. However, her new husband’s constant affairs and unfaithfulness wounded the woman deeply. One day a midnight “guest” warned Pavel that unless he changed his behavior towards his wife, the “guest” would bring about a quick untimely death as a punishment. 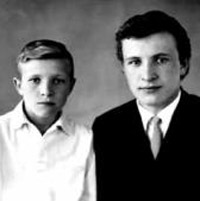 Husband punished by ghost for being unfaithful

The frightened man asked Anna to forgive him but was not able to control himself and within 6 months found another woman. That same day he and his new lover fell off a bridge, and Pavel died.

Anna used to be one of the most popular brides in the Kemerovo village. Beautiful and sharp she never lacked men’s attention. But the girl was waiting for a prince on a white horse. One day her dream came true. When she was 18 Anna met her love Oleg and the two got married.

Her husband adored the young woman and carried her around in his arms. Unfortunately their happiness was short-lived. Oleg had to go to war and where he was killed.

For a long time Anna could believe that she would never see her loved one again and that she was a widow at 18. The only reason she did not try to commit suicide was her little son. Taking care of the baby enabled her to hang on to life.

Soon Anna met her second love and was happily married again. But another war took her revived hope away. When time came to celebrate the victory Anna was alone with two children.

Three years later another man settled in the village. Pavel was ordered to come to Siberia from Ukraine. He was bitter and aggressive, and everyone preferred to avoid him. That is, everyone except for Anna.

Her home needed a pair of man’s hands, but soon the woman realized that she was in love with Pavel. They got married but he never answered her love in the same way. Instead, Pavel was constantly cheating on Anna in front of the whole village.

One night when he once again left home to stay with a prostitute Pavel decided to sleep at the woman’s place till morning. Suddenly he heard the door open and someone approach him. The scariest thing was that Pavel had personally locked all the doors, Tom' reports.

Someone invisible grabbed the man’s hair saying, “How long will you treat your wife this way? You took such a beautiful smart girl and don’t appreciate her. If I see you unfaithful to her one more time I will do something awful to you.”

Having finished his threat the “guest” let go off Pavel’s hair and disappeared, and Pavel jumped out of the house and ran home to his wife screaming. After he woke up the whole house with his shouting he fell on his knees in front of Anna and asked her in a stuttering voice to forgive him.

Anna forgave him and laughed at the story. But the main thing was – the midnight terror really affected Pavel. He became kind and attentive, stopped leaving the house in search of women and began taking care of his family.

Even though the change did not last very long at all, those months were the happiest for Anna. It was the first time she could fully enjoy a family life. Six months later Pavel reverted back to his old habits. But this became his last affair.

One night the man went out for a walk with his friends and some women after having a few drinks. As they walked they decided to cross a newly-built bridge.

When Pavel and his lover stepped on the bridge something made a crackling noise, and the whole construction collapsed within seconds. The ground was not too far below but for Pavel the fall became fatal: he broke his spinal chord.

Anna faithfully stayed by his bed but her husband died very soon after the accident. At eth funeral many said that his death was his own fault because he did not heed the warning. Anna did not re-marry after Pavel’s death.