Moscow may soon use a new way of public transportation – aero taxis. Helipads for chopper taxis are planned to be built on river banks and garage roofs, as well as on the roofs of large medical centers. Vladimir Davydov, the head of the Atlant Soyuz company, which develops the project of the copter taxi, told reporters Wednesday that an hour-long flight on board a taxi-copter would cost $650. 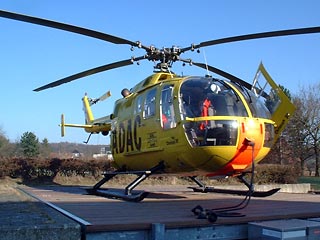 According to Mr. Davydov, the taxi will be flying above the rivers, major highways and industrial areas of Moscow. “For the time being, we have developed the flight instructions in the airspace of Moscow. The instructions are being coordinated with the Russian Ministry for Defense, the Federal Security Bureau and other governmental agencies,” Vladimir Davydov said.

The project involves efficacious helicopter ports too, which are situated on the roofs of city hospitals, Itar Tass reports.

The project stipulates two kinds of flights: in the airspace of Moscow and between the airports. “Special permissions will be issued for every flight and for every helicopter. It goes without saying that there will be no flights allowed above governmental highways, buildings and other objects of state significance,” Vladimir Davydov said.

As for the cost of taxi flights above Moscow, the author of the project said that the work principle of the taxi-copter will be similar to the one used by conventional taxi cabs. “If a helicopter can carry six passengers, but there is only one client, he or she will have to pay the entire cost for the flight. The tariff will be based on the price of the flight hour, which is about $650. If the flight lasts for ten minutes, the client will have to pay $150.

Vladimir Davydov originally plans to use ten helicopters in the project: to fly within the limits of the city and between Moscow's airports, Newsru said.