12-year-old prodigy wants to be the president of Russia

Ilya Leder, the youngest graduate of the secondary school in the town of Vyksa, the Nizhny Novgorod region, has been recently awarded a golden medal and a diploma

According to the school's principal Lyudmila Manakhova, the boy was head and shoulders above the rest of boys of the same age and therefore went to the second grade from the very beginning. Ilya studied a two-year curriculum every year in school. 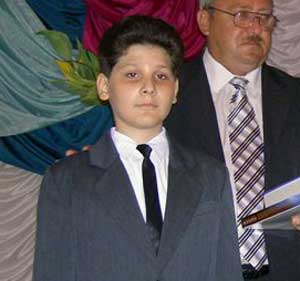 Ilya mostly studied at home. He would show up at school either to pick up new homework or pass another exam. As a result, he completed his school studies in five years, twice as short as a regular school program. The teachers believe the prodigy achieved spectacular results by working hard. Ilya's extraordinary talents stopped being the source of continuos astonishment to his teachers after they found out that the boy could read fluently at 18 months of age and he learned to write when he was 3 years old.

Ilya owes a lot to his grandmother who raised him alone. The boy's parents were killed in a car crash when he was just a toddler. The grandmother not only succeeded in playing a mother/father figure for the boy, she often was his only friend since Ilya was a sickly child until he turned 10 and had to stay home most of his time.

But Ilya is by no means a bookworm. “Apart from studying I have many other interests in my life, I enjoy walking in the forest, swimming, riding a catamaran, I also like playing soccer and basketball,” says Ilya. He says he has lots of friends of both sexes.

Meanwhile, the boy does not regard himself a prodigy. He says his abilities stem from his passion for studies. He can not single out any particular subject as his favorite one. He seemed to be more interested in studying the humanities e.g. history, literary. Needless to say, he can spend hours sitting behind the computer just like any other boy of his age.

Incidentally, Ilya's outstanding abilities did not pay him any dividends until recently. Only yesterday he received his first incentives from the local authorities. He received 1,500 rubles for winning a golden medal of merit, another 1,000 was paid to him for being a gifted teenager. Ilya already made up his mind in terms of a walk of life. He wants to be a doctor. According to him, he is going to take a break for one year before taking entry exams at a medical school. The boy wants to be Russian minister of public health in the long run. Being the Russian president is his ultimate goal.

On the photo: Ilya Leder