Russian woman Klavdia Kryukova was married to a man with whom she never lived together. However, she says that her marriage to Leonid Kovalenko was surprisingly happy. The tender husband always called his wife "angel on Earth." 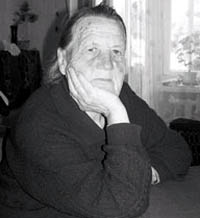 Klavdia never considered herself a beauty but men fell in love with her at first sight. The woman was married twice and her second marriage turned out to be the most unusual.

Klavdia and Leonid got acquainted by chance. The man first got acquainted with the husband of Klavdia’s sister who praised the woman immensely and regretted that she had no husband. Leonid’s family life was unhappy also; his wife abandoned him and the man got settled in the Bryansk Region. When Leonid heard about Klavdia’s virtues he confessed he was dreaming of having such a wife.

Klavdia’s brother-in-law explained how Leonid could find the woman, and the man actually came to the place where Klavdia lived. But the woman did not like the uninvited guest’s coming. Leonid liked Klavdia but had to come and knock the woman’s door several times but all in vain.

Klavdia’s neighbor helped Leonid break down the woman’s resistance. The couple just had dates for some time. But soon Klavdia said they must either get married or part. Leonid was happy that his beloved wanted to marry him. When married, they decided not to break their habitual way of living. Leonid came to his wife to stay together for some time and then soon left for his own place. Klavdia says that she was immensely happy with Leonid for 33 years.

Now when the husband is dead the 85-year-old woman is still keeping the warmest memory of him and also other men with whom she kept close relations.

Klavdia met her first husband soon after WWII ended. She had to spend a night in some village when having a short trip during her vacation. Some hospitable people let her spend a night in their house. Suddenly, a stranger came to the house where she stayed for the night. The grand man was living next door and invited Klavdia to have dinner in his house. The woman turned the invitation down as she was afraid of staying alone with the stranger. However, the man was persistent and repeated his invitation an hour later. The hostess of the house where Klavdia stayed explained that the man was the director of a country school and a very respectable person. So, the young woman accepted the invitation to have dinner with Alexander (that was the name of the stranger).

As it turned out later, Alexander brought Klavdia to his house so that his mother could see the young woman and decide is she would be a good candidature to marry. The mother liked Klavdia at once and said she would welcome her as a daughter-in-law. But Klavdia was surprised to learn that the strange family had such forward-looking plans concerning her and thought it would be better to get rid of them. Soon after she left the village, Alexander somehow learnt her address and showered her with letters. Alexander invariably invited Klavdia to come to his place and still repeated the proposal of marriage. Klavdia’s parents insisted that it would be better for the young woman to marry such a respectable man.

Soon after the marriage, Klavdia gave birth to a son. But unfortunately the couple did not live long together as Alexander turned out to be a real womanizer and courted every single female teacher in his school. Absolutely exhausted with Alexander’s faithlessness, Klavdia took the son and left for the city of Bryansk.

Many years later, when his subsequent four marriages turned out to be a failure, Alexander came to Klavdia and asked her pardon. The woman forgave her unfaithful ex-husband shortly before his sudden death.