Elena Shportun, the brand-new bodybuilding champion of the world, started pumping iron to get into shape ten years ago. 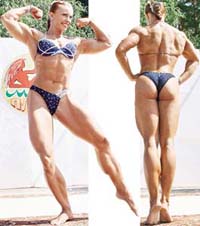 The world women’s bodybuilding competition has recently ended in the city of Santa Susanna in Spain. Elena Shportun, an athlete from the city of Zheleznogorsk in Krasnoyarsk Region, won the tournament. She was also awarded the title of Miss Olympia.

Elena is still in Spain . But we were fortunate to telephone her parents and her coach.

As it turned out, Elena had to borrow money from her relatives and friends to pay for her airfare, board and lodging during her stay in Spain. The trip cost her $1,500. Elena was saving up every cent. For example, she sewed a swimsuit for the tournament herself. Designer competition swimsuits cost several thousands of rubles. However, her win will not pay pack in terms of money because it does not carry any prize money.

Elena first appeared in a gym ten years ago. Her reasons were quite typical for a girl: fat deposits on the thighs.

“Her butt simply became too big,” says Nikolai Malyshev, Elena’s coach, rather nonchalantly about the shape she used to have. “And she looked pretty thin above the waist. Elena was keen to improve her body. So she began using bodybuilding equipment to get into shape. Little by little, she got “absorbed” into her hobby, which eventually became her athletic activity,” adds Malyshev.

Elena is normally pumping iron for several hours a day.

Choosing the right diet is also important to keep one’s body in shape like this. Elena does not eat a lot but she eats frequently. She does not touch any candies or meals with a high content of fat. Elena’s diet mostly consists of turkey, and plenty of rice, fish and eggs.

Elena can lift a 100 kg barbell in a supine position. From 2002 through 2005, Elena won four Russian bodybuilding championships. She is single, but in a relationship at the moment.