“Well, it happened by accident, so I had to give birth to my child,” says Bashtam Gorbunenko as she shrugs her shoulders. Bashtam lives in the village of Komsomolsky, in the Volgograd region. She turned 12 in February. 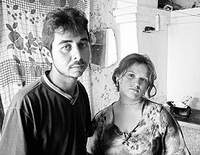 Bashtam gave birth to a baby boy several days ago. It is her second child, she gave birth to her first-born son Mitya a year ago. Bashtam was 11 at the time (article).

Moskovsky Komsomolets published an article about Gorbunenko’s family a year ago. Last August Bashtam assured our correspondent that she had no immediate plans to have another baby.

Man proposes, God disposes or so the saying goes. Bashtam got pregnant again, and gave birth to another baby boy this September. The boy was named Ivan. Bashtam’s labor was on time. Not unlike his younger brother, Ivan is said to have been born a healthy child.

Bashtam and Mikhail, 21, cannot go to a registry office and have their relationship officially registered because she is far too underage. Mikhail is the father of both offspring. Nevertheless, they live together. Bashtam and Mikhail happen to share the surname despite being members of the only two Gypsy families in the village. The Gypsies are known for their common family names.

Mikhail took the news about Bashtam’s second pregnancy for granted. Disregarding the Gypsy tradition which forbids the father to partake in care of a baby, he promised support and help to Bashtam.

These days Bashtam is breast-feeding two babies since her first son is just one year old. Despite being a teenager herself, Bashtam has plenty of milk in her mammary glands. The circumstance is apparently running in the family – Pavlina, Bashtam’s mother, used to breast-feed her babies until they turned 3-4 years old.

Bashtam does not sing lullabies to her children, and she does not tell them any fairy tales. “They’re too small, they won’t make out anything, anyway,” says she. She is not going to read them any books either. Bashtam and her husband never went to school, she can’t read, neither can he. But the young mother believes the ability to read and write does not matter much. She says raising her children strong and healthy is the most important thing. The Gorbunenko seniors share her views on literacy. “The woman is made for managing her household! You don’t have to be able to read or write to be a good housewife. I can’t read or write but I brought up four children, so what? Bashtam is good at taking care of the kitchen garden. I don’t see any problem here,” says Natalya, the mother of Mikhail. The young parents don’t seem to see any problems related to a lack of money either. The Gypsies do odd jobs sometimes, and the money is barely enough to make both ends meet. “We, the adults, do need money to buy some nice clothes or a yummy thing. What the hell do children need money for? They suck on the teat all right. And we have a good stock of children’s clothes. These rompers have been worn by my younger brothers and sisters, I wore them too in my time,” says Bashtam.

She does not look so certain this time when asked about her plans for the future. “You know, you never know. Maybe I’ll be in a family way again,” says she with a shrug of her shoulders.