New courses have been opened in Moscow that teach how to argue with corrupt policemen in a well-educated way. For the police officers patrolling Moscow streets bribe demanding has become a daily practice: the city’s residents are forced to pay even for such ridiculous things as not carrying a passport, Komsomolskaya Pravda reports. 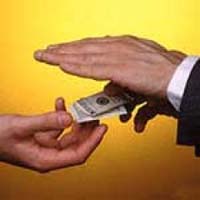 Psychologists decided to help the struggling Muscovites and visitors to our capital – now there are classes called “Don’t be afraid to argue with the policemen.” Using the role playing format students are being taught the rules of arguing. They are taught why it is a bad idea to give in to the corrupted officers’ pressure for bribes. They are also given tips on how to report the abuses and punish the perpetrators who don’t wish to abide by the law. The price for the courses can be compared to a one-time “financial aid” offered to an overly curious policeman who demands to see documents.

Psychologist Anatoliy Verchinskiy provides his own advice on the bribe handling. “Police officers are human, too. There are good ones and bad ones among them. Your task is not to offend the good ones and to make peace with the bad ones. The first phrase should be “How can I help you?” without showing signs of intimidation or flattery,” the psychologist suggests.

Typical cases of conflict situations with the policemen

If a policeman refuses to provide his last name when he demands to see documents, he is trying to extort money. In this case it is best to insist on knowing his identity (article 92). It is very important to remember his last name and title, and the best thing is to have it recorded with a cell phone’s sound recorder. It is the officer’s duty to show his ID, so asking for that is perfectly reasonable. An extorter will not like this while an officer honorably doing his job would not mind at all, the paper reports.

If a policeman demands to see one’s passport in particular and is not interested in any other document, then it is a good idea to remind him that Russia does not have a law requiring citizens to carry their passports with them at all times. However there is s statement on the last page of a passport telling the citizens to take good care of their documents and to keep them safe. Therefore it would be justified to say that the passport is kept in a safe place at home or in a bank for protection. Any form of identification issued by the government (travel documents, military id or driver’s license) should be enough for the officer.

Oftentimes an occasional policeman would not give back a passport after checking it. The paper recommends not letting go off the document for any reason what so ever. The officers can cheat by promising to give the passport back after “establishing the circumstances.” They are simply forcing a person to say, “Perhaps there is another way to handle this?” In this case one needs to dial 02 right away.