Ilya Osipov received 22 diplomas for the sake of his wife. But the 78-year-old resident of Novokuznetsk does not intend to stop there. His current plans include entering into a medical school. Despite his advanced age the “eternal student” never cheats in class and always gets very good grades. 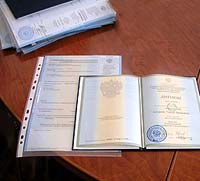 Ilya keeps all the documents confirming the completion of fundamental higher education establishments, technical colleges and other academies next to the photo of his wife Fausta. “I try so hard all of my life for her sake,” Osipov confesses.

The man still considers his meeting Fausta a gift of fate. His heart was forever captured by the beautiful intelligent girl who by that time was already working as a toxicologist at the Novokuznetsk State Medical University and was considered a great specialist in the area. In all the fifty years of marriage Ilya has not even once regretted his choice.

Ilya’s illness became the most difficult challenge for the Osipov family. Participating in numerous expeditions left a mark on the man’ health. Ilya was confined to bed after one of the trips, and later the illness continued to progress with the years until he finally became paralyzed. Fausta decided to buy a little home in Ashmarino. She brought her sick motionless husband closer to the warm sun and fresh air. In order to protect him from falling into depression she personally took him out into the garden daily.

One time Fausta discovered her husband lying in the grass with his body swollen from bee stings. Paralyzed Ilya was not able to chase away the angry insects. With a frightened heart the man’s wife was expecting his condition to worsen, but the unthinkable happened instead: Ilya began feeling his arms and legs, Kuznetskiy Traktat reports.

Fausta decided to continue the bee experiment, and the sensitivity slowly began to come back to her spouse. “I used to lay there and think: life is passing right by me,” Ilya recalls, “And not just passing – it is rushing by! I am missing so much. I would never be able to catch up later on.”

After many months of boredom and immobility recovering Ilya began devouring books and receiving diplomas one after another. The first one was from the Osinnikov Rock Technical College of Carbon Industry.

After that Osipov easily graduated from the rock department of Siberian Metallurgic Institute and Novokuznetsk Education Institute. He also received a degree in Journalism, became a needle reflex therapist and made other accomplishments. But the most significant one Ilya considers the document stating his graduation from the Beekeeping Academy .

The latest diploma – presumably not the last one – is from the Feldsher Department of Novokuznetsk Medical College, which Osipov received at the age of 70. According to Tatyana Soboleva, the director of college’s evening department, everyone was in shock when Ilya came to fill out an application for himself rather than for his granddaughter.

Osipov passed all his admission exams and received excellent grades but later he had some trouble. The college could not accept him despite all the petitions sent to the city’s administration because of the man’s age. Then Ilya decided to continue attending classes on his own and defended himself with a claim that he had come for knowledge, not for silly papers.

The college president was so impressed with the volunteer’s stubbornness that she sent yet another petition to the regional department of Public Health Service asking to enlist the grey-haired gentleman with the rest of the students. Finally Osipov the student was granted the petition.

Professors didn’t go easy on him for the sake of his age nor did they allow any excuses. The 70-year-old adventurer could not afford a single bad grade. “I would be too ashamed to go home afterwards,” Ilya explains, “I never used any cheat sheets but I did copy a few times from the girls who had better works.”

One time Ilya came in to repeat the examination in order to get an “A” instead of a “B.” The teacher asked him why he would want to do that, and Osipov answered, “I set a goal for myself to live to 99 years. I have a whole life ahead of me. I want to receive the best education possible, but the best schools only accept students with perfect grades.”