A Japanese fighter took off a small air field in the Philippines on October 15, 1944. The plane never got back to its base. The disappearance of the plane was a piece of news announced beforehand. The plane was piloted by Captain Masafumi Arima, the commander of the 26th Air Flotilla (part of the 11th Air Fleet), who is sometimes credited with inventing kamikaze tactic. His flight was the first kamikaze attack. On the day of his suicide mission, other pilots tried to reason Arima out of going ahead with his plan. Despite their attempts, Arima remained adamant. He tore at his shoulder stripes and threw them away. Then he climbed into his fighter, started up the engine and flew off into the pale blue sky. 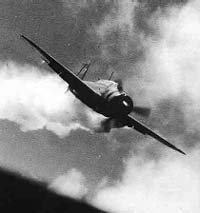 But his sacrifice was all in vain. He failed to crash his plane into the USS Franklin in Leyte Gulf , and found his death in the Pacific. The event gave rise to an ill-fated attempt to slow down the disaster Japan was steadily heading for at the time.

The Japanese Navy had become a shadow of its former self by the summer of 1944, while Imperial Japan’s fighter planes were becoming outclassed and outnumbered by newer U.S.-made planes at the time. Following losses at Midway, and the battles of attrition in the Solomon Islands and over Rabaul, and the Battle of the Philippine Sea, where Japan lost 400 planes and pilots, skilled fighter pilots became scarce. The 1st Air Fleet commandant, Vice Admiral Takijiro Onushi was aware that hundreds of his barely trained pilots will perish without inflicting any damage to the enemy. He decided to form a suicide attack unit, the Kamikaze Special Attack Force.

One did not have to be a skilled pilot to fly a plane loaded with explosives into a warship, especially if numerous fanatics were ready and willing to do the job. Twenty four student pilots promptly volunteered for the special attack force. They formed the four sub-units, whose names were Unit Shikishima (a poetic name for Japan), Unit Yamato (“Spirit of Empire”), Unit Asahi (rising sun), and Unit Yamazakura (mountain cherry blossom). These names were taken from a patriotic poem by the Japanese classic scholar Motoori Norinaga. In the Japanese language, kamikaze usually translated as "divine wind" (kami is the word for "god", "spirit", or "divinity"; and kaze for "wind"), the term was originally used as the name of a legendary typhoon said to have saved Japan from a Mongol invasion fleet in 1281. In Japanese, the exact term used for units carrying out these suicide attacks during World War II is tokubetsu kōgeki tai, which literally means "special attack unit."

Several schools were hastily set up where kamikaze pilots were trained in the basics of flying. They were not trained in landing techniques, navigation or use of on-board radio equipment. Special ceremonies often held immediately prior to kamikaze missions substituted for a lack of proper training. During those ceremonies, pilots were chanting prayers from their families and dining with the brass. They were also given military decorations, samurai swords etc.

About 450 kamikaze missions were carried out during the Battle of the Philippines. Of the above number, 210 planes hit their targets, and 179 planes returned to the bases and were used to subsequent raids. The kamikaze attack force unitsfirst used YokosukaMXY7 Okha rocket-bombs at the Battle of Okinawa in April-June 1945. The weapon was essentially an anti-ship missile guided by a pilot positioned within. The rocket-bomb was delivered by a bomber to a 20-30 km range to a target, and dropped at an altitude of 8,000 m. The warhead of the rocket-bomb weighed 750 kilos.

Slow-speed bombers carrying the rocket-bombs were vulnerable to airborne interception and anti-aircraft barrages. A large group of bombers was spotted by U.S. aircraft on March 18, 1945. The Japanese planes were 200 km away from their targets. They were attacked by the Americans, and had to drop the unmanned bombs into the ocean. But the maneuver proved futile. All the Japanese bombers were shot down.

The bomb’s low maneuverability at high speeds was yet another shortcoming that decreased its effectiveness. The Japanese used 74 manned bombs during the Battle of Okinawa.

As a result, only one U.S. destroyer was sunken and four other warships were damaged. However, the Japanese suicide attacks had much greater psychological impact on the U.S. Navy. Lots of U.S. sailors could not resist the lingering panic attacks while on duty within the range of Japanese naval aviation.

The peak came during the period of April-June 1945, at the Battle of Okinawa. On April 6, 1945, waves of planes made hundreds of attacks, in Operation Kikusui ("floating chrysanthemums"). At Okinawa, kamikaze attacks focused at first on Allied destroyers on picket duty, and then on the carriers in the middle of the fleet. Suicide attacks by planes or boats at Okinawa sank or put out of action at least 30 US warships and at least three US merchant ships, along with some from other Allied forces. The attacks expended 1,465 planes. Many warships of all classes were damaged, some severely, but no aircraft carriers, battleships or cruisers were sunk by kamikazes at Okinawa. Most of the ships destroyed were destroyers or smaller vessels, especially those on picket duty.

The U.S. aircraft carrier Enterprise was hit by a kamikaze dive bomber during one of the attacks. The plane crashed into the ship’s deck and exploded, destroying 13 aircraft. The pilot died in the blast but his dead body somehow remained intact. It was thrown onto the deck. The U.S. servicemen ripped to pieces the pilot’s jacket, removed the contents of its pockets, and cut off all the buttons as souvenirs. The buttons were embossed with a design of cherry blossom, the kamikaze insignia.

By the end of World War II, the Japanese naval air service had sacrificed 2,525 kamikaze pilots and the army air force had given 1,387. According to an official Japanese announcement, the missions sank 81 ships and damaged 195, and according to a Japanese tally, suicide attacks accounted for up to 80 percent of US losses in the final phase of the war in the Pacific.

According to official statistics of the U.S. Air Force, approximately 2,800 kamikaze attackers sunk 34 Navy ships, damaged 368 others, killed 4,900 sailors, and wounded over 4,800.

But the desperate suicide attacks failed to save Japan from being defeated in the war.