Woman believes her dead son came back as baby-girl

Ulianovsk resident who gave birth to a baby-girl believes that her dead son came back to her in this way. He often appeared to the woman in her dreams and promised to come back within two years in the form of a girl. The woman knew her son’s arrival date beforehand. Her new female child was born on the exact same day as her deceased brother. 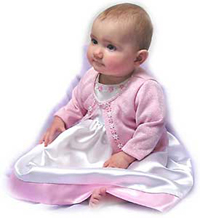 Woman believes her dead son came back as baby-girl

A few years ago Olga Leonicheva lost her beloved son. Dmitriy, 19, committed suicide by hanging himself at the entrance of his house. According to friends and relatives young man had no apparent grounds for taking his own life. “This secret he took to the grave. He didn’t even leave me a note,” says Olga.

“Ulianovsky Meridian” informs that Olga got married when she was 17 and very soon had a son whom she named Dmitriy. The marriage didn’t work out, however, and after the divorce Olga remarried and had another son Vladik. Dmitriy and his stepfather didn’t get along very well, but the boy continued to get more and more attached to his mother as the years went by. “Dmitriy always had a complicated character. He brought me and my husband many hardships. He used to skip school and disrespect his teachers,” Olga confesses.

After he finished school, young man began his military service in the Far East. After two weeks he fled the military base because he couldn’t put up with the all beating and mocking. It took him a few days to cross the taiga wilderness on foot with hardly any food.

During his military service Dmitriy was often hit on the head, which caused him to lose hearing in his left ear. He also became anxious and irritable. In order to save her son from state’s punishment for deserting the army Olga was forced to sell her car. But soon the escapist got a decent job and they were able to purchase a new vehicle.

The teenager’s mother maintained that there were no warning signs, no uneasy feelings pointing to the approaching tragedy. On that unfortunate day Olga, her female friend, her husband and her younger son were spending time in a park. “My husband suddenly had a bad feeling: he grew nervous and urged us to hurry home. But my friend and I hadn’t seen each other in a long time and couldn’t part ways quickly. Then he left us to talk to each other and went home alone,” recalls Leonicheva.

After he discovered the body of his stepson hanging at the entrance to their house Igor rushed to save him but it was already too late. The teenager’s despairing mother attempted suicide twice – once the night following his funeral and once on the fortieth day since his death.

After she recovered from the tragedy, Olga began seeing strange dreams of her son, in which she would talk to him and discuss his return. Dmitriy would respond that he would return in two years. He also kept mentioning some girl.

One year later the woman became pregnant at the age of 40. When she told her family that she was going to have a baby, even her husband tried to talk her out of it. Many thought that she had lost her mind. But Olga was convinced that this was the way her son was supposed to come back.

Doctors told her that the child was due January 15, but the soon-to-be mother knew with certainty that she would give birth on January 26, her deceased son’s birthday. And she was right: baby-daughter Kseniya was born on that exact day. Number 26 is special in Olga’s family because her husband and younger sin were both also born on that date.

The midwife receiving Leonchiva’s third child happened to be the same woman who received Dmitriy 21 years before. This fact became yet another proof for Olga that her beloved son had come back to her.

She had her new child without any difficulties, and the new-born girl was born very healthy. Despite the fact that Kseniya does not resemble Dmitriy, Olga claims that she sees her son Dmitriy through in daughter’s eyes.