Police captain Alexander Selyaninov who underwent serious surgery to change his sex has caused another sensation. Now the "woman" says that her most cherished dream is to meet Fidel Castro and find her personal happiness on the  "Island of Freedom." 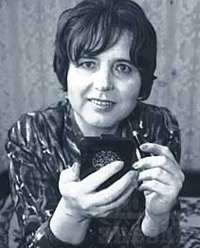 It was Alexander’s dream since very childhood to become a woman. He liked to keep company with girls, try on mother’s clothes and turn over the pages of women’s magazines. And at the same time the boy spent a lot of time playing football and other active games with boys. For many years, Alexander had to live a double life and concealed his real feelings from relatives.

Service in the army turned out to be the most difficult period for the young man. But even though his inner self cried Alexander was a woman he still acted as a brave man in the army and never let senior soldiers haze him. Unlike other soldiers who considered themselves real men, Alexander endured difficulties of the army service with much dignity.

When Alexander came back home from the army he entered a college to acquire the profession of a miner. Soon, he was offered work at the police. And he was taken on the police service after finishing special preparation courses and close fight training.

Being a policeman, Alexander was once disguised as a woman to act as bait for a serial killer who violated women in the town. Every evening, Alexander put on high heel boots, a woman’s coat and went out. At that, he felt absolutely free and with ease.

The man finally arrived at a decision to change his sex after he was appointed a district police officer in a remote settlement in Russia’s Perm Region. Being far away from his relatives and old acquaintances, Alexander began to wear women’s clothes.

As soon as the man realized perfectly well that it was his longstanding dream to become a woman, he decided to undergo a medical examination. Doctors in the city of Perm studied Alexander’s phenomenon for more than a month hoping to trace the problem origins. Doctors from Moscow gave the man a final diagnosis, ‘Transsexualism, nuclear reaction’. And the diagnosis gave Alexander an opportunity to undergo surgery.

The man bravely underwent two serious operations and a long rehabilitation period in 1991 to become a woman named Alexandra. The woman got a new passport and a new birth certificate.

It is sad that Alexandra’s parents and friends disapproved of the doing. The unique operation made the woman the talk of the day in the small town where she lives. And now everybody in the place knows her story. Nevertheless, the woman never gives up. She takes an active part in the political life of the town; runs her own business and keeps the house. She is a good cook and wonderfully bakes pies. Now when her most cherished dream has come true, Alexandra has a dream of going to Cuba where she expects to meet Fidel Castro and hopes to find new friends and even her only love.

Secretary General of Culture and Health, the Russian Sexology Association, Sergey Agarkov says that Alexander’s case is really rare as usually transsexuals choose jobs that correspond the sex to which they consider themselves belonging. A correct diagnosis and right psychological prognosis guarantee successful social adaptation of transsexuals, the expert adds.

Even when doctors diagnose a patient correctly as belonging to a different sex, it will take a patient about three years to get adapted to his new life. And it is a new life indeed as those who change their sex have to learn to sit, walk, speak and dress the manner typical of the new sex a transsexual chooses. This process turns out to be a real ordeal for many transsexuals as they at first feel themselves intermediate sex persons, Sergey Agarkov says.

Changing of one’s own sex is a great event in the life that means that life will never be the same again for this person. He or she will probably have to change contacts, employment and place of residence for good social adaptation. And this is one of the basic conditions for a transsexual to find his own self.