A Mexican man weighing 550 kilos, the most fattest man in the world, will be operated on in Italy, a surgeon told the Italian news agency Ansa Tuesday. Manuel Uribe Garza, 40, will travel to the town of Modena in central Italy for surgery. 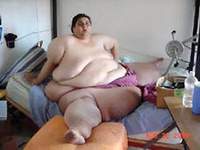 Read more about obesity and fat people on Pravda.Ru

“We will have a meeting during the coming couple of days to clarify all issues of the hospitalization and prepare the operation room and surgical tools,’ professor Giancarlo DeBernardinis told the Italian agency yesterday. “This is actually our biggest problem. We need to make a special operation room for the surgery. We will also need to have extra large tools and surgical retractors,” the doctor added.

Professor DeBernardinis has performed about 1,000 operations on people suffering from excessive weight. The doctor visited his would-be patient, the world’s fattest man, in Mexico in March. This month DeBernardinis will have another trip to Mexico too.

“The situation has become even worse since March. I came to this conclusion when I had a look at the photographs that the man sent me. He is currently on a diet which is absolutely useless. There is no other alternative but surgery in cases like this,” the professor said.

Italian doctors plan to shorten Uribe Garza’s intestines and decrease the extent of food absorption. “As a result we will have only ten percent of the man’s intestines accessible for food movement. In two years Uribe is to lose a considerable part of his 550 kilograms,” the doctor promised.

Uribe Garza has not been able to leave his house due to his extremely excessive weight. Specialists say that the Mexican man suffers from a very rare form of obesity. Manuel used to weigh only 130 kilos before. The situation went out of control several years ago. The man is currently bedridden. He has to use a whole system of mechanisms just to sit down.