Steve Irwin, the Australian television personality and naturalist known as the Crocodile Hunter, has been killed by a stingray's barb while diving, it was reported today. 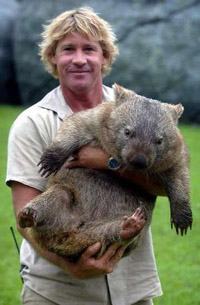 Australia Zoo, the wildlife park Irwin ran in northeastern Queensland state, issued a statement confirming he was killed Monday "by a stingray barb to his heart" while filming a sequence for his daughter's new television series on the Great Barrier Reef, the AP reports.

Mr Irwin, 44, was filming underwater at the Great Barrier Reef when the accident happened, according to the Sydney Daily Telegraph website.

The Australian Broadcasting Corporation said Mr Irwin had been diving around Lowe Isles Reef, near Port Douglas, about 1,260 miles north of Brisbane.

Police and ambulance officials confirmed Mr Irwin had died and said his family had been advised.

Mr Irwin's Crocodile Hunter series was first broadcast in Australia in 1992 and has since been shown around the world on the Discovery channel. He was known for his enthusiasm for wildlife and his catchphrase, "Crikey".

His public image was dented in 2004 when he held his baby son in one arm while feeding crocodiles at a zoo, Telegraph.co.uk reports.

His wildlife documentaries, now watched by hundreds of millions in more than 130 countries, have made the ebullient, croc-wrestling presenter a cult hero in the US, where his most avid fans are children, students, and - strange but true - FBI agents, the Sydney Morning Herald says.