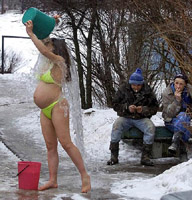 In Ancient India and Ancient China, parents began to inure their babies to understand the arts three months after the conception

Candidate of historical sciences, lecturer in History of Medicine at the Pavlov Medical University, St.Petersburg, Larissa Kondrashkina tells about the history of pregnancy and childbirth with different nations.

Pregnancy was always considered the most important period in the life of women of all nations. That was usually a period when women were to observe special rules, and these rules were as a rule similar with different people.

Today, people speak a lot about the importance of applying bringing-up methods even before babies are born. Some of us believe the tendency has outlined just recently, however this tradition was popular even in the past centuries. In Ancient India and Ancient China, parents began to inure their babies to understand the arts three months after the conception. For this purpose, pregnant women had only fine things around them and listened just to fine music; they ate tasty meals sanctified in the church. These measures were believed to make unborn babies beautiful and talented.

Nowadays, doctors say that contemporary pregnant women must have the same environment for better pregnancy and good future of their babies. In the old times, husbands in some provinces presented their wives with jewelry when they learnt about pregnancy. Pregnant women wore clothes made of delicate and expensive fabrics; the blue color was considered the most favorable for the development of unborn babies. Fine music was obligatory for pregnant women, as it is actually good for babies and mothers. That is why, artists in Asian countries regularly organized concerts for pregnant women thousands of years ago.

At the beginning of the 20th century, there was a special institute assisting women in childbirth in St.Petersburg, Russia, founded with the assistance of famous accoucheur Dmitry Ott. The doctor insisted that the hospital must have a concert hall with an organ. Every week, all female patients of the hospital were invited to concerts at the hall.

In Ancient India and Ancient China, pregnant women always sang, drew birds and plants during pregnancy. These traditions may seem naive, but they do have an effect upon unborn babies. It is known that Napoleon’s mother drew toy tin soldiers and imagined they were battling. So, the future emperor probably knew the essence of battles even before he was born. In the cultures of many countries, arts were obligatory for pregnant women.

In Ancient China, pregnant women sang nice and quiet songs, at that the melody and the text were of little importance, as singing first of all helps bring much oxygen to the organism of a pregnant woman. Indeed, during singing we first take a deep breath, and then goes slow exhalation. So, singing is in fact a really esthetic physical exercise.

Contrary to many of the modern recommendations, many nations disapproved of walking during pregnancy. When it was evident that women were expecting babies, they never walked too away from the home. Moslem women were prohibited to go outside before the sunset during pregnancy. On the one hand, it is a good method to avoid heavy UV-radiation. On the other hand, Moslems believed that a baby would be born with too many birthmarks if a mother was exposed to sunrays for too long.

Contemporary couples often want to deliver their babies together. Many centuries ago, men in European countries often stayed in the maternity ward during baby delivery. They encouraged their wives and helped them endure pains and suffering. In addition to the moral support, husbands also served an actual physical support for women during labour pains. Men’s presence in the maternity ward was typical of men in Italy, Spain, France, Yugoslavia and Scandinavian countries.   But in some countries, husbands were prohibited to enter maternity wards, as only women were allowed to see how babies come to the world.

Women who assisted in delivery, often stayed in the home for some time after the delivery to look after the house. Mothers were not allowed to do anything about the house for several days after delivery. Women in Arab countries had the longest after-delivery rest that lasted for 40 days when they were prohibited to do things about the house. Instead, they were focused on their health and on babies. A tradition similar to this was also popular in Europe and Russia.

In Russia, an accouche became the key figure in the house after a baby came to the world. This woman stayed in a house for several weeks and looked after the baby; she got back home only when the mother was strong enough again to look after her baby herself. This seems to be a wise tradition indeed. Women need some time to restore their health and energy after the childbirth. Doctors say it is important when a woman has someone to help her about the house and look after the baby when she is still weak after the difficult work of baby delivery. In Russia, the post-delivery period traditionally depended upon the well-being of a family. Those who had little money had no opportunity for long rest as they needed to work.

Baby delivery was not always a success in Russian villages, as there often were poor hygienic conditions. As a result, mothers could get infected and some even died in baby delivery. Women not only in villages but even in large cities died of childbirth fever because doctors were not always tidy when operating in the maternity ward.  Doctor Zemmelweis from Hungary was the first who offered to wash hands before baby delivery, but his colleagues declared him insane because of this initiative. It was just several years later that the teaching of aseptic and anti-septic appeared.

By the way, if the birth rate keeps on declining the population of the planet will get stabilized by about 9 billion people in three centuries, which is actually much lower than the previous alarming forecasts. If the present-day situation with the lifetime continues, people in 2030 may expect to live for over 95 years. Japan, the leader in people’s life span today, may expect to have the life span of 106 years. In general, only countries where the number of HIV-infected people is speedily increasing (53 countries), will have a negative tendency in the life expectancy.Today, the population of Asia is 4.5 times bigger than that of Africa, but the gap will drop to 2.2 times by the year of 2100 and will remain on the lever till 2300.