Obviously, some things are best purchased new; lingerie pops to mind. But lots of other stuff depreciates quickly while still having plenty of useable life left. Here are 10 items where the cost vs. use equation strongly tilts toward buying used. 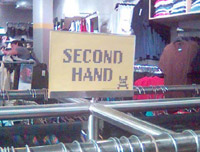 Your local library, for example, may allow you to reserve titles online and then deliver them to your nearest branch for pick-up. Used book stores abound, both in your town and online. If you're looking for a potboiler to get you through your next cross-country flight, just stop by almost any yard sale and pick up four for $1.

Some online retailers now surface used versions of many of the DVD movies they sell new. You can find similar deals for online CDs (yes, Virginia, some of us dinosaurs still buy CDs). Other good hunting grounds for purchase of used items: movie rental chains like Blockbuster; used record stores; yard sales.

Parents know: it's all but impossible to predict which toy will be a hit and which will lie forlorn at the bottom of the toy box. So rather than gamble at full price, cruise consignment shops and yard sales for bargains. Better than cheap, though, is free. Some parents set up regular toy-swapping meets, or you might be lucky enough to score hand-me-downs from friends and relatives.

Fat markups on most gems (100% or more is fairly common) means that you'd be lucky to get one-third of what you paid at a retail store, should you ever need to sell.So let somebody else get socked with that depreciation. Find a pawn shop that's been in business for awhile, get to know the owner and ask him or her for recommendations. Some readers have had good results buying via newspaper ads, but I'd want to take the piece to a jeweler for an appraisal first.

We may buy everything from badminton rackets to weight sets fully intending to wear them out, but too often they wind up collecting dust. Buy someone else's good intention and you'll save some bucks.Happy hunting grounds: yard sales, newspaper and online ads, resale stores like Play It Again Sports.

You could call these a notoriously lousy investment if you could call them an investment at all, but you can't - because what real investment is guaranteed to lose 30% to 70% right off the bat? That is, unless you buy used. There's a huge number of folks who caved in to three hours of hard sell and are now desperate to dump their shares.

The average new car loses 12.2% of its value in the first year, according to Edmunds.com; on a $20,000 car, that's $2,440, or more than $200 a month. Some cars depreciate even faster, depending on demand, incentives offered and other factors. Why not let someone else take that hit? Not only will you be able to save money (or buy more car), but you'll pay less for insurance. Cars are better-built and last longer than ever before, which means you're less likely to get a lemon.

Buy used, and you'll pay half or less what the software cost new. Console games like those for the Xbox and Sony PS2 that list for $50 new, for instance, can often be purchased used for $20 or less a year after release. But it's more than just a matter of economy. Letting someone else be the early adopter also allows you to benefit from their experience. You'll find more reviews and information on software that's been out a year or more (and you won't be that far behind the leading edge). The bugs will have been identified along with any workarounds, although you may have to live with some problems that are fixed in later versions.

Built to take a beating and last a lifetime, good-quality office desks, filing cabinets and credenzas are relatively easy to find even when a recession isn't cratering the local economy.

Well-made tools with few or no moving parts -- like hammers, wrenches, shovels, hoes, etc. -- can last decades with proper maintenance and are relatively easy to find at yard sales. If you're not going to use a tool frequently, you may be able to rent it or borrow from a friend or neighbor rather than buying something else to clutter up your garage. (Some neighborhoods even run tool-sharing cooperatives.)