The income of the Russian tennis star Maria Sharapova in 2006 made up $25 million. This is a record number among all female athletes. 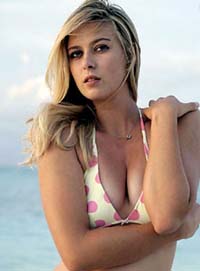 US magazine Sports Illustrated proved that Maria Sharapova is the highest paid female athlete in the world. The loudest tennis player makes up 13.4 British pounds a year, which equals about 25 million US dollars. Maria has not been able to achieve any significant victories on tennis court after her triumph in Wimbledon 2004. However, the star, who currently resides in Florida, continues to receive very good money on her bank account from a variety of advertising campaigns.

At present moment, Sharapova ranks fourth among world’s strongest female tennis players. Unlike Anna Kournikova (pictures), Maria says at her almost every press conference that tennis is her first priority. When journalists told her about her earnings, she joked: “Money is never enough. There is no limit of how much you can make,” said she.

It is worthy of note that her skills of playing tennis and screaming on the court bring her only two million dollars a year. The basic income comes from advertising. The Russian girl of Siberian origin has become a great attraction to advertisers. It just so happens that her face and legs bring her $20 a year. She advertises tennis gear, cameras, cars, watches and cellular phones. When a journalist asked her about her appearance in Lady’s Speed Stick deodorant TV ads, which are currently aired on many Russian channels, she said that she could not recollect such a contract.

Maria Sharapova is very proud of launching the production of her own perfume. “When you win Wimbledon, you think about the work that you had to do to accomplish the goal, but you don’t think about money. But if you win all the four Slams, you can make more than 100 million dollars.” It is not ruled out that Maria can make such earnings in the future.